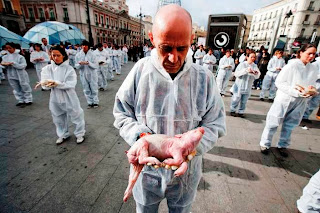 MADRID, Spain (AFP) - This happened one month ago and this demonstration made that lot of people changed their mind about eating animals. Last December, Spanish demonstrators, all dressed in white, gathered in the Puerta del Sol square, in the heart of the capital's tourist district, each carrying one of the dead animals. The activists displayed the carcasses of about 100 foxes, rabbits, minks, lambs, chickens and pigs in central Madrid in a protest against the treatment of animals. On Sunday afternoon, activists from the Animal Equality Organization in Spain put on a disturbing demonstration in Madrid. Wearing white, the activists carried the carcasses of around 100 dead cats, chickens, foxes, minks, and pigs. The carcasses were obtained from slaughterhouses, fur farms, poultry and pig farms. The activists gathered at the Puerta del Sol Square, in the center of the city’s tourist area. The demonstration was meant to draw attention to the issue of animal cruelty and also to remind people about the International Animal Rights Day which was celebrated on December 10. The protest had the purpose to "call attention to the terrible life that each of these animals seem to have," said the Animal Equality association, which organised protest. "On December 10, Human Rights Day is celebrated around the world. For many years Animal Rights Day has also been celebrated, to show that animals that do not belong to the human species also deserve respect," it said in a statement. 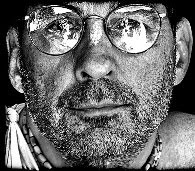 The Gaudiya Vaisnava object to meat eating because they consider animal slaughter a merciless act. In the language of the Bhagavatam, it is said that “suna”, mercilessness or violence to the innocent, was prohibited by Raja Pariksit and that wherever this kind of activity takes place, Kali-yuga, the age of hypocrisy, flourishes. To the extent that one is involved in merciless acts, one will be checked from making significant spiritual progress. Devotees, however, have no license for pride whatsoever. If a devotee becomes proud of being a vegetarian, he is a fool, for being a genuine devotee involves much more than vegetarianism.