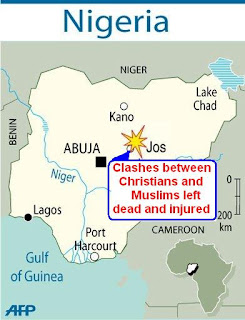 JOS, Nigeria (AHN) - Troops and riot police are patrolling the Nigerian city of Jos, after fighting between gangs of Muslim and Christian youths in the central city. The clashes at the weekend between Christians and Muslims left at least 26 dead and more than 300 wounded, according to a local imam. During the melée, houses, mosques, and churches were set on fire. Nigerian troops are now patroling the city trying to maintain order. Officials say 35 people have been arrested. In an attempt to curb escalating violence, the local government has imposed a dusk to dawn curfew. More than 3,000 people were meanwhile sheltering in mosques, churches and police barracks after being displaced from their homes, the Red Cross said. It remains unclear what sparked the violence, but there were warnings something like this could happen. Residents reportedly told officials the violence originated after an argument over the rebuilding of homes destroyed during 2008's civil unrest. In 2008; 200 people were killed, while in 2001 civil unrest resulted in the deaths of more than 1,000 people. Such clashes in Nigeria are often blamed on sectarianism, however poverty and access to resources such as land often lies at the root of the violence.

Jos, capital of Plateau state and home to 500,000 people, along with other central and northern areas in Nigeria have been plagued by religious violence in recent years. Both Christians and Muslims make up half the population respectively. Traditionally the two groups have lived peacefully, however bloody conflicts and uprisings in the past have resulted over political and economic influence. Poverty and access to precious resources usually are flash points for the region's instability and clashes. The city has a history of ethnic and religious tension - at least 200 people were killed in 2008 and 1,000 in 2001. Last month, at least 40 people were killed in clashes between security forces and members of an Islamist sect in the northern Bauchi State.

If one advocates the Hindu religion, the Muslim religion, the Christian religion, this religion or that religion, there will be conflicts. History shows that the followers of religious systems without a clear conception of God have fought with one another. There are many instances of this in human history, but systems of religion that do not concentrate upon service to the Supreme are temporary and cannot last for long because they are full of envy. There are many activities directed against such religious systems, and therefore one must give up the idea of “my belief” and “your belief.” Everyone should believe in God and surrender unto Him. That is bhāgavata-dharma.