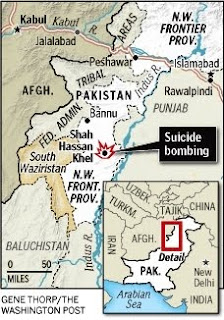 ISLAMABAD (CNN) - New Year began on a bloody note in Pakistan. A suicide car bomb exploded Friday in the middle of a group of men playing volleyball in northwest Pakistan, killing 95 and wounding more than 80, marking a bloody start to the new year. The deadly suicide blast took place in a remote northwestern village near the Pakistani town of Lakki Marwat. The bomber targeted a crowd of people watching a volleyball match in a congested neighborhood. The attack occurred at Shah Hasankhel village, where a large crowd was watching a volleyball game between two local teams when the bomber struck at 5.30 pm. The attack was the second this week in Pakistan to inflict major civilian casualties following Monday's suicide bombing in Karachi targeting a Shiite procession which left at least 40 people dead. The bomber drove his car onto the field and detonated the explosives. Over 20 nearby houses and several shops collapsed and several people were feared to be stilled buried in the debris, some of the casualties were residents around the volleyball court, police said, and at least eight houses in the neighborhood collapsed, and the blast was so powerful it could be felt from 11 miles (18 kilometers) away.

District police Chief Mohammed Ayub Khan told CNN that more than 600 pounds of explosives (300 kilograms) were used and that the village where the attack occurred was once considered a hub of Taliban insurgents. However, he says, locals with the help of authorities set up a militia force and killed or expelled the militants from their area. The police officer says Friday's bombing is a possible reaction to the anti-militancy efforts. "These insurgents, they were not very happy about it and they were cut off because the people had risen against them. So this was one way of taking revenge from these people," he said. Authorities say scores of others were wounding and children are among the victims. Friday's attack is the third major militant activity in the country within a week leaving more than 120 people dead. 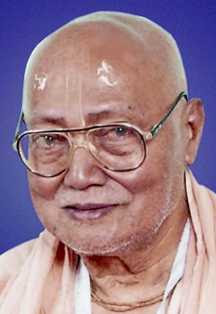 According to Gita, the cause of anger is obstruction to fulfillment of one's desire. A real devotee cannot have any desire of his own except service of Sri Krishna. So, in a pure devotee, there cannot be any possibility of the origination of such anger due to hindrance to worldly desires. ... A bonafide-surrendered soul has got no worries as he has got firm belief - Sri Krishna will protect and sustain him under all circumstance. The world is the Prison-House for the punishment of culprits who are averse to Sri Krishna. We cannot get permanent peace in this Prison-House, it will always remain disturbed. This is not the place of our permanent stay. We lose nothing if any of our desires is not fulfilled. Love of Krishna will go with us, everything else will remain here.