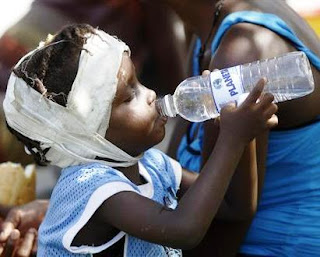 PORT-AU-PRINCE (The Guardian) - A new earthquake jolted Port-au-Prince today, sending people fleeing on to the streets and complicating relief efforts as the United States appeared poised to dispatch another 4,000 troops to Haiti. A magnitude 6.1 quake, the most powerful aftershock since the 12 January cataclysm, rattled ruins in the capital and sowed panic but caused no serious reported damage or casualties. Seismologists said the epicentre was about 35 miles south-west of the city and the focus was six miles deep. They warned of possible stronger aftershocks to come as the earth adjusted to new stresses caused by the original quake. The new tremor hit just after 6am local time and lasted for 10 seconds, sending terrified residents running into the streets. It came just after the first glimmer of optimism that conditions might improve, with the arrival of more American troops and a ramped up aid effort. There are no immediate reports of anyone being killed or wounded by the strong aftershock, but some already severely damaged buildings came tumbling down. The lone surviving wall of the main cathedral, complete with a stained-glass window of Jesus, collapsed.

But still the delivery process is painfully slow and disorganised, and the people's patience is running out. Food and water is still desperately needed in many parts of the capital and beyond. The government is encouraging people to leave the centre of the city where most of the buildings lie in ruins. Some are heeding that call, but many more in the city and the outlying suburbs are waiting for life-saving aid that has yet to arrive. US Marines have secured an area in remote Haiti in the first of what is expected to be several staging positions for relief supplies. They are keeping hundreds of Haitians at bay while food and water are being offloaded. The supplies are going to the United Nations who are then distributing them through the town. 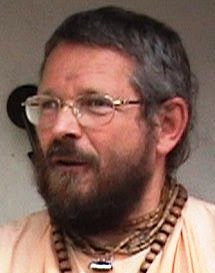 Vaisnavas are foremost merciful. They suffer when another person suffers. The people in Haiti have suffered a serious blow by the forces of nature. They live in a tropical island but so many things are tough on them. Are they more sinful then others who suffer less? I do not think so. I rather think that this degree of suffering is coming towards all of us if we keep violating the basic rules of compassion for animals, unborn children and other victims of abuse. Mother Nature shows that we are not doing things in a correct way. Today Haiti tomorrow some other place. World-wars, corruption and torture of animals for sport. Is there a connection? In a practical way Vaisnavas always try to extend their hands of help to the needy.