DISEASES AND OTHER HEALTH RISKS
COME AFTER THE QUAKE. CAN HAITI COPE? 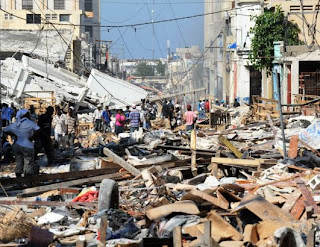 PORT-AU-PRINCE (CNN) - The eventual death toll from the massive earthquake that struck Haiti on Jan. 12 will be unbearable, hundreds of thousands of people could have died. But while emergency-response teams have already begun combing through the wreckage, searching for injured people who might still be saved and treating wounds to prevent infection, there are longer-term health risks that threaten the devastated island. With basic health care and sanitation all but destroyed, and millions of survivors likely left homeless, unchecked infectious disease and contamination will pose a threat to survivors. It doesn't help that even on its best day, Haiti is a public-health disaster. It is one of the poorest countries on earth, with only 1 in every 50 Haitians holding a steady job. No Haitian city has a public sewage system, and less than half the population has any access to drinking-water services. Malnutrition is rampant, nearly 200,000 people live with HIV or AIDS, and just half the childhood population is vaccinated against basic diseases like diphtheria. The quake will make it all unimaginably worse.

That vulnerability will be felt first in the water. In a major disaster, time is of the essence, and survivors will succumb to thirst and dehydration much faster than malnutrition. With destroyed drinking-water distribution systems - and survivors crammed into camps without much sanitation - water supplies could quickly become contaminated. That can lead to rapidly spreading water-borne diseases like cholera and dysentery, which can sweep through refugee camps. The next danger will be existing infectious diseases that might attack survivors - especially in the cramped and less than hygienic conditions of a refugee camp. Measles and other childhood infections will be particularly worrying, especially since nearly half of Haiti's population is under the age of 18 and many are already in poor health.

Mercy is more beautiful than justice. We cannot think of blaming the spirit of justice, but at the same time we cannot deny that there is mercy over justice. But one who can extend mercy over justice must have such power that he is able to give due compensation. The Lord has such power of compensation. Krishna is such an aspect of the Lord. He can give mercy through love and affection, and by any means we want to live in that environment. Mahāprabhu came to show that to be the plane for which we should strive.

Vaisnavas are foremost merciful. They suffer when another person suffers. The people in Haiti have suffered a serious blow by the forces of nature. They live in a tropical island but so many things are tough on them. Are they more sinful then others who suffer less? I do not think so. I rather think that this degree of suffering is coming towards all of us if we keep violating the basic rules of compassion for animals, unborn children and other victims of abuse. Mother nature shows that we are not doing things in a correct way.
Today haiti tomorrow some other place. World-wars, corruption and torture of animals for sport. Is there a connection?
To get out of this world by stopping to give trouble to others. That is the meaning of indifference towards such things as disasters. In an practical way Vaisnavas always try to extend their hands of help to the needy.
That was the mood of Srila Sridhar Maharaj whose association I was aloud to have.
swami b.a. Paramadvaiti