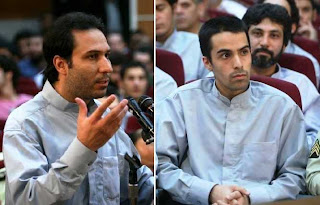 LONDON (Reuters) - Iran hanged two men convicted of being Mohareb (enemies of God), the first executions of dissidents since post-election protests, during the wake of the unrest that erupted after last year's disputed election. Mohammad Reza Ali Zamani and Arash Rahmani Pour were hanged on Thursday morning after their sentences were confirmed by a Tehran appeals court. Both were convicted of being "Mohareb" - enemies of God - and of trying to overthrow the "Islamic establishment". They were also convicted of belonging to armed opposition groups. Iran has tried more than 100 political activists and protesters since August. The opposition says that President Ahmadinejad only won because of massive electoral fraud. Hundreds of thousands have poured into the streets in Iran since then on various occasions to support Mr Ahmadinejad’s main challenger, the opposition leader Mir Hossein Mousavi. According to the news, Rahmani Pour, 19, had been arrested before the election, however he was put before the same mass trial as opposition leaders and activists arrested amid the crackdown, and was hanged yesterday. The lawyer for Rahmani Pour said the charges were political and the verdict "illegal and unjust". "He was aged 19 at the time of his arrest, and he had anything to do with the post-poll riots. An execution with this speed and rush has only one explanation ... the government is trying to prevent the expansion of the opposition movement through the spread of fear and intimidation," the lawyer said.

The United States strongly condemned the hangings. The White House has condemned Iran for executing two men accused of involvement in an armed anti-government group. "We see this as a low point in the Islamic Republic's unjust and ruthless crackdown on peaceful dissent. Murdering political prisoners exercising their universal rights will not bring the respect and legitimacy that Iran seeks," White House spokesman Bill Burton told reporters on Thursday.

Recently newspapers are reporting that faith in a personal God is diminishing. This means that people are becoming more and more foolish. This is natural in Kali-yuga, for as the age of Kali progresses, bodily strength, memory and mercy diminish. We actually see that the present generation is not as strong as the previous. People also have short memories. We also understand that sometimes people are killed while other people pass by, not caring. Thus mercy is also diminishing. Because everything is diminishing, God consciousness is diminishing also.