THE LARGEST MASS GRAVE IN COLOMBIA 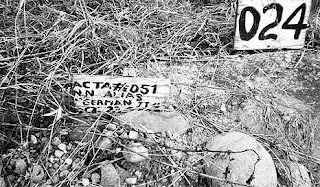 BOGOTA - The authorities of the municipality of La Macarena in Meta department complained of a pit with thousands of unidentified bodies which have been buried in the cemetery by army troops. Villagers, NGOs and international press reported this week that, behind the cemetery, there are about 2,000 unidentified bodies buried by the army. The town of La Macarena, 200 miles south of Bogota, could be the scene of one of the biggest mass graves in the history of the Colombian armed conflict, if there are 2000 confirmed dead there. A spokesman for the Attorney General in Bogota revealed that a mission of the Technical Investigation Corps of the agency, CTI, was in the cemetery and found the existence of a "large number" of bodies in the grave but it only made a few burials. According to the Colombian military spokesman, in that place there are "guerrillas killed in combat," while social organizations assert that among these dead bodies there are several leaders of human rights groups disappeared some years ago without leaving any trace. Human rights organizations claim that civilians lie buried there by the Colombian army.

These organizations claim that the bodies buried in that area are a case of so-called "false positives" or extrajudicial executions, which include murder of civilians falsely accused of being involved in subversive acts. These cases, which were denounced as state and political crimes by the political opposition and also by the social organizations, threw a large cloud of doubt on the policy of "democratic security" carried out by the Colombian president of that country. This terrible discovery has put the Colombian country in the spotlight of several international organizations of human rights. A lot of executions were registered during the Colombian armed conflict in different places of the country. So far only low-ranking soldiers were charged for these events, which come to more than 3000 cases. During the last weeks many of those army personnel, who has been involved in those violent actions against subversive groups, were released by expiration of the terms in the investigation.

King Pariksit, in disciplining the Personification of Kali, submitted to his earnest plea and granted him five places for his residence, irreligion to flourish. These are namely gambling, liquor and all other stimulants, illicit sexual intercourse, violence (brutal killing of defenseless creatures) and gold (money used in the service of the Lord properly does not fall into this category). … Violence to living creatures leads to a temperament devoid of compassion all together. Thus all forms of irreligiousness spring up from these vices.