PLANE CRASHED INTO THE SEA: NO SURVIVORS 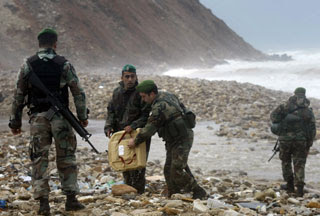 BEIRUT (AP) - All 90 passengers aboard an Ethiopian plane that crashed into the Mediterranean Sea are feared dead, with more than twenty dead bodies recovered so far. Officials with the rescue operation said that by Monday morning 23 corpses were recovered from the crash site, the state-run Lebanese National News Agency reported. The Boeing 737-800 which was en route to the Ethiopian capital, Addis Ababa, nose-dived into the Mediterranean Sea on Monday, just minutes after take-off from Beirut International Airport. Witnesses who live near Beirut's southern coast have reported seeing a ball of fire as the airliner plunged into the sea. Most of the 83 passengers aboard were Lebanese and Ethiopian nationals. The flight also had seven crew members. The cause of the crash remains unclear; however, Lebanon's president Michel Sleiman has ruled out the possibility of a terrorist attack. "We don't believe that there is any indication for sabotage or foul play," Sleiman said. It appears that the stormy weather and technical problems combined with a fuel overload have triggered fire on the plane leading to its eventual crash, aviation sources told Press TV.

Rescue efforts are still ongoing in the southern coast of Beirut as helicopters and rescue ships surround the crash scene in search for survivors. Beirut has so far requested for help from the Lebanese navy and the United Nations Interim Force in Lebanon. Lebanese Prime Minister Saad Hariri announced a day of mourning for the victims of the crash, ordering all government departments to close, the news agency added. He also praised security forces and the Red Cross for their efforts, while urging patience until the recovery of the jetliner's black box.

The living entity has been covered by illusion for a long time and have been suffering countless miseries but by receiving the mercy of the pure devotees, he takes to the devotional service of the Lord which frees him from the effects of the illusory energy. Seeing the bewilderment of the living entity, the compassionate Lord reveals the scriptures. Consequently, by this utility of scripture with the help of the external spiritual master and internal 'caitya-guru' (the Supreme Lord in the heart), he uncovers his real spiritual identity. This according to stages is the process of knowledge to Sri Krishna (sambandha), the devotional practice which is abhideya and finally devotion to the Supreme Lord.

Email ThisBlogThis!Share to TwitterShare to FacebookShare to Pinterest
Etiquetas: Accidents