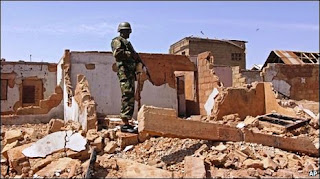 JOS, Nigeria (Reuters) - Nigerian authorities have eased up on a 24-hour curfew in the city of Jos. Relative calm has been restored to the city after days of fighting between Muslims and Christians left hundreds dead, according to reports. The violence began on Sunday and spread to neighboring towns. Jos is no stranger to religious warfare and violence. Since Thursday's melee began both Christian and Muslim mobs torched and looted homes, churches, mosques and businesses. Nigerian officials sent in the army to help quell the violence. And at the onset of the violence the governor of Plateau State where Jos is the capital instituted a 24 hour curfew. Muslim-Christian clashes in Nigeria’s central city of Jos have displaced near 20,000 people in three days and caused water and food shortages in the city. Food, water and medicine supplies have been running low in the city amid a round-the-clock curfew authorities imposed Tuesday after Christian and Muslim gangs fought pitched street battles, leaving around 300 people dead. At one mosque alone, more than 200 bodies have been left for burial, while dozens of others have been taken to churches.

Fighting between the groups of youths began last weekend and quickly escalated into a massacre. Over 200 people were arrested during the crackdown on the clashes. It is unclear what sparked the clashes, which also forced around 18,000 people to flee their homes. The city of Jos lies in Nigeria's Middle Belt where the mainly Muslim north meets the predominantly Christian south and has been a flashpoint for Nigeria's religious differences for the past decade. The International Committee of the Red Cross estimates 18,000 people fled the violence during the days of fighting. They also report the army's presence was a strong factor in ending the violence. It remains unclear the exact number of casualties, but religious officials count the dead in the hundreds. Some of those injured and arrested reportedly had gunshot wounds, machete cuts and broken bones. 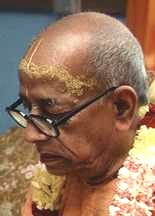 Conceptions of “your religion” and “my religion” are completely absent from bhāgavata-dharma. Bhāgavata-dharma means following the orders given by the Supreme Lord, Bhagavān, as stated in Bhagavad-gītā: sarva-dharmān parityajya mām ekam śaranam vraja [Bg. 18.66]. God is one, and God is for everyone. Therefore everyone must surrender to God. That is the pure conception of religion. Whatever God orders constitutes religion (dharmam tu sākshād bhagavat-pranītam [SB 6.3.19]). In bhāgavata-dharma there is no question of “what you believe” and “what I believe.” Everyone must believe in the Supreme Lord and carry out His orders. That is dharma, religion.