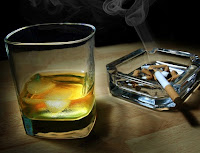 www.webmd.com - New research suggests that your hangover will be worse if you smoke when you drink. People who smoke on a day when they have been drinking alcohol heavily are twice as likely to report hangover symptoms as those who only drank. In the study of college students, heavy drinking was defined as about 5 or 6 cans of beer in one hour. But substance abuse experts not affiliated with study are quick to point out that binge drinking and smoking - alone and together - can have far worse consequences than hangover symptoms. Smoking increases the risk for cancer, heart disease, and stroke, and binge drinking can lead to addiction, alcohol poisoning, car accidents, and unprotected sex.
“In general, people smoke more when they drink because it counteracts some of the sedative effects of alcohol,” says researcher Damaris J. Rohsenow, PhD., professor of behavioral and social sciences at the Center for Alcohol and Addiction Studies at Brown University in Providence, R.I. 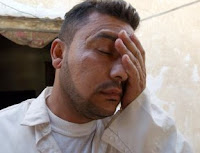 “People also tend to feel better when they smoke while drinking because both increase the release of [the brain chemical] dopamine.” Dopamine is known as the brain’s pleasure chemical. The findings appear in the Journal of Studies on Alcohol and Drugs. Exactly how smoking makes a hangover worse is not fully understood. Both alcohol and smoking can disrupt sleep, which may make hangovers feel a lot worse, Rohsenow says. What’s more, the dopamine rush may also be followed by a shortfall of this brain chemical. The study included 113 college students from a Midwestern university.
They answered an online survey daily for eight weeks. Questions concerned how much they drank or smoked on the day before as well as their current-day hangover symptoms. According to the findings, students smoked about seven cigarettes a day, and this number jumped to more than 10 on heavy or binge-drinking days. Students reported drinking an average of more than two drinks a day, and more than 10 on average on heavy drinking days.

Researchers investigated the effects of smoking on hangovers from drinking. Authors of the study define, “Hangover refers to the cluster of unpleasant symptoms of physical distress that occur as blood alcohol falls after an acute incident of drinking to intoxication.” Hangover symptoms include, but are not limited to: headache, nausea, fatigue, feeling dehydrated or thirsty, slowed mental function. Dr. Rohsenow suggested people who choose to engage in heavy drinking should smoke fewer cigarettes to reduce hangover symptoms the following day. “The best way to avoid a hangover is not to drink that much, but if you smoke, it will aggravate it, so this provides another reason to not smoke,” she says. The human body is designed to help us to achieve the transcendence and needs to be cared by adopting healthy practices that harmonize and connect it with our inner self. 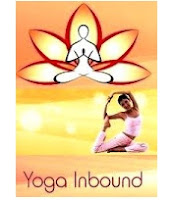 The physical body is considered an instrument or vehicle of the soul on its path towards perfection, and it has its own needs that must be met in order to run well.  Right exercise: The asanas, improve blood circulation and muscle flexibility, and help the joints, muscles and other body parts to work correctly. Correct breathing: Yogic breathing techniques called pranayama, producing a burst of energy that leads to mental and physical rejuvenation of the body.  Correct relaxation:  Relaxation is a natural method of revitalizing the body and mind.  Rigth diet: The yogic diet is a vegetarian one and is composed of pure foods that promote health and vitality.  Positive thinking and Meditation: They purify the intellect and allow to achieve wisdom and inner peace.

The hangover is worst if you smoke while drinking. But there is a way help to prevent hangover is Armr PartyStarter drink. This is a really effective remedy for hangover.