SPIRITUAL SIGNIFICANCE OF FRIDAY IN ISLAM

WHY FRIDAY IS CONSIDERED
THE HOLIEST DAY IN ISLAM?

www.boldsky.com - You might have heard the greetings of 'Jummah Mubarak' many a times. But do you know what it means? This greeting is usually heard on Fridays which according to Islam is the holiest day of the week. In Hinduism various days of the week are considered to be holy. But in monotheistic religions like Christianity, Islam and Judaism, there is one special holy day in the week. In Christianity and Judaism, both of which are Abrahamic religions, Sunday is the day of Sabbath or rest. It is the day when Christians go to Church.
Similarly in Islam, Friday is the day for prayer and festivities. It is the first day of the week in these Islamic countries; however, very few people know the spiritual significance of Friday in Islam.

According to Islamic scriptures, the holy prophet Mohammed proclaimed that Friday is the holiest day on which the sun rises. The prophet went to explain his proclamation by saying that God created the first man on Earth, Adam on the same day. Adam was also expelled from paradise on a fateful Friday due to his crime of passion. It was a Friday on which God forgave his son Adam and restored him to this Earth. According to Islamic scriptures, Quyamat or the day of destruction of this Universe will also be a Friday.
Devout Muslims are expected to pray or read the Namaz five times in a day. It is not compulsory for them to go to mosque everyday. But all the Muslims are expected to be at the mosque for Namaz on Friday evening. This is the prayer of Jummah which is usually conducted by a Muezzin.

In many religions there is a special day of the week that is considered holy. In many Islamic countries, Friday is set as weekly off. Anwesha, author of the article, explains why Friday is the Holy Day of the week for Islam. "Friday in Islam is a day for special prayer and festivities followed by it," she says. Special prayers are offered by Muslims on Friday. "In large Mosques like the Jamma Masjid in Delhi, crowd of thousands gathers to offer their special Friday prayers," she notes. The revealed scripture of the Mohammedans is the Koran, which accepts the fact that ultimately there is only one God and that the Lord is the Supreme Truth worshipable by everyone. 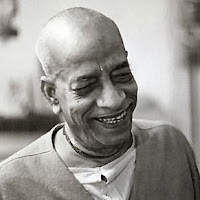 Śri Caitanya Mahaprabhu said, "The Koran has certainly established impersonalism, but at the end it refutes that impersonalism and establishes the personal God." ... "No conditioned soul can get out of material bondage without serving the Supreme Personality of Godhead. Love at His lotus feet is the ultimate goal of life."
According to the Mohammedan scripture, without Evadat, offering prayers at a mosque or elsewhere five times daily (Namaz), one cannot be successful in life. Sri Caitanya Mahaprabhu pointed out that in the revealed scripture of the Mohammedans, love of Godhead is the ultimate goal. Karma-yoga and jnana-yoga are certainly described in the Koran, but ultimately the Koran states that the ultimate goal is the offering of prayers to the Supreme Person (Evadat).