www.reuters.com - Palestinians clashed with Israeli forces in the occupied West Bank on Wednesday during demonstrations to mark 65 years since what they call the Nakba (Catastrophe) when Israel's creation caused many to lose their homes and become refugees. A shell fired from Gaza, which is ruled by the Islamist movement Hamas, exploded in an open area of Israel but caused no injuries, according to an Israeli military spokesman. There was no immediate claim of responsibility from militants in Gaza.
Protesters skirmished with Israeli forces outside a refugee camp near the West Bank city of Hebron and at a prison near Ramallah, leaving several Palestinians injured. Israeli police in Jerusalem scuffled with Palestinian protesters, tossing stun grenades and making several arrests.

Thousands also rallied in the main square of Ramallah, the Palestinians' de facto capital while Jerusalem remains under Israeli control, holding up placards with the names of villages depopulated in 1948 and old keys, symbols of lost homes. Arab states failed in a 1948 war to stop the Jews settling in Palestine, who cited biblical ties to the land and a need for a Jewish state, which up to that time was under British colonial control.
U.S. Secretary of State John Kerry is to return to the region on Tuesday in another bid to revive peace talks frozen since 2010. But a resolution remains elusive and many Palestinians cling to a desire for refugees and descendants to return to ancestral lands now in Israel - an idea Israel rejects, saying it would spell the end of the Jewish state.

The 65th anniversary of Nakba Day was commemorated today by Palestinians throughout Israel, the West Bank, the Gaza Strip, and the Palestinian diaspora. The “Nakba (the catastrophe) Day” marks the day Israel was founded. In Palestinian towns, at exactly noon a memorial siren was sounded, its length 65 seconds, one second for every year Israel has existed. In the afternoon hours, Palestinian youths began clashing with IDF soldiers. They hurled stones at security forces who returned fire with riot dispersing equipment. Clashes are taking place among people and nations due to our mistaken sense of propriety; in fact we are not the owners of anything in this world. 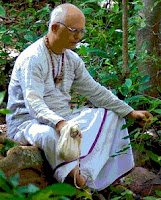 Śrīla Prabhupāda said we must teach all over the world that Lord Krishna is the Owner and the Supreme Enjoyer.  The sense of ownership is extremely dangerous since it confuses us in our relationship with God.  When we believe to be the owners of something, we believe to be the enjoyers of that, for this reason to believe that something belongs to me is a great illusion; nothing is ours, not even our own body, that to say of others, or the things related to the body, such as children, family, money, facilities, etc.. Krishna often repeats in the Bhagavad-Gita that we must understand that nothing is ours, everything belongs to Him. ... Krishna says: “When you understand that I am the owner of all, everything belongs to Me and I am the enjoyer, then even you'll be My owner and enjoyer.”