PROMOTING PEACE AND TOLERANCE AMONG RELIGIONS

www.mywesttexas.com - In an effort to promote peace and tolerance, leaders from different religious backgrounds met last month in Midland, Texas, USA for an interfaith discussion. St. Nicholas' Episcopal Church played host to leaders of the Baptist, Hindu, Jewish, Muslim and Mormon faiths, and more than a hundred listeners. All of the religious leaders explained about their faith and what role it plays in the day-to-day lives of people all over the world.
The Muslim faith was represented on stage by Imam Wazir Ali, of Houston.  "It was the plan of God that the world is a pluralistic place," said the iman Ali. "What he wants us to do instead of looking at pluralism and diversity as a problem, is look at it as an opportunity to benefit from the genius of other human beings and other cultures."

The leaders spoke about how the different faiths can co-exist peaceably in today's world to complex issues such as what each religion teaches about death, resurrection and an afterlife. Satguru Bodhinatha Veylanswami, of Kauai's Hindu Monastery, explained that his faith does not teach about resurrection. The resurrection is such a foreign concept in the Hindu faith that he took time to explain the basis of it to people in the audience who might not recognize the term or know its meaning.
"This idea of the resurrection is focused on what's going to happen to the body, ... where the Hindu idea is focused on not the body, but the soul," he said. Also participating in the discussion were the Rev. Randel Everett, of First Baptist Church; Rabbi Holy Levin Cohn, of Temple Beth El in Odessa; and Jerry Zant, stake president of the Odessa Texas Stake of the Church of Jesus Christ of Latter-day Saints.

Much of the messages - from all religions - had tones of tolerance, love, acceptance and harmony. Despite differing views on the specifics, all leaders seemed in agreement on the existence of a higher power and that power's desire for humans to live peacefully and in harmony, always caring for the needs of others. The most important thing that comes from the annual Interfaith Event is the effort for “sharing of knowledge and ideas, a quest for the truth,” said Adam Syed, a member of the Muslim Association of West Texas. We should encourage tolerance and reduce misconceptions of unfamiliar religions and traditions. 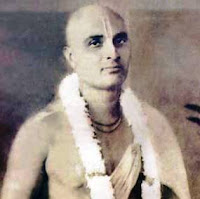 A sense of common interest can be fostered among individuals, if they know that they are inter-connected, are parts of one Organic System and are the sons and daughters of one Father.  Here is the task of all religions; to teach people that all beings of the world are closely inter-related.   Although steadfastness or firm belief in God (Nistha) according to some particular faith and eligibility of the individual is congenial for healthy spiritual growth of every individual, religious bigotry which begets enmity is condemnable, as it is against the real interest of the individual and society.  Real religion teaches love for one another.