www.nydailynews.com - Chinese police have busted a $1 million crime ring that was allegedly passing off the meat of rodents and other small animals as mutton. In total, more than 900 suspects have been arrested this year alone for selling tainted or fake meat products, adding to a long list of hazardous food practices that range from butchering cats to pass as poultry to thousands of dead pigs dumped in a river outside of Shanghai.  More than 20,000 tons of counterfeit meat was seized in the raid, according to a release from China's Ministry of Public Security.
Suspects in eastern China allegedly purchased fox, mink and rat meat and passed it off as lamb. It remains unclear where the smugglers got the meat in the first place. The fake products had been treated to more closely resemble lamb, and were doused in gelatin and pigmented to mask their true forms, The New York Times reported.

Shanghai police, in an effort to show greater transparency, warned diners to look out for tell-tale signs of imitation meat. "In fake lamb, it is easy to pull apart the fat from the red meat. In real lamb, the fat is difficult to separate," they wrote on Sina Weibo, China's equivalent to Twitter.  Residents of China have become hardened to many issues plaguing the country, including pollution and environmental issues, but news of the "meat ring" has rattled many. One user said on Weibo: "How many rats does it take to put together a sheep? Is it cheaper to raise rats than sheep?"
The news comes amid a bird flu scare, and weeks after thousands of dead pigs were found discarded in water supplies. 16,000 bloated hog carcasses were discovered floating in the body of water outside of Shanghai in March. The dead animals were believed to be diseased and likely discarded by a piggery upstream.

Police in Shanghai have busted a $1 million crime ring that was allegedly passing off the meat of rodents and other small animals as beef or lamb meat. Chinese authorities seized more than 20,000 tons of illegal meat billed as beef or mutton but actually made of fox, mink and rat in an operation that has spanned three months. 904 suspects have been arrested. Police said the suspects injected the meat with water to make it appear fresher and, in some cases, sold diseased meat to consumers. Authorities are also probing crimes related to dairy products and the use of  hydrogen peroxide in the processing of chicken claws. In their effort to profit by deception, counterfeiters threaten all population's health. 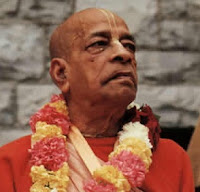 This is called samsāra-dāvānala. Even in ordinary transactions between two people, there is invariably cheating because the conditioned soul is defective in four ways - he is illusioned, he commits mistakes, his knowledge is imperfect, and he has a propensity to cheat. Unless one is liberated from material conditioning, these four defects must be there. Consequently every man has a cheating propensity, which is employed in business or money transactions. ... Unless one can find a person transcendental to the four basic defects, one should not accept advice and become a victim of the material condition. The best process is to take the advice and instructions of Śrī Krishna or His bona fide representative. In this way one can be happy in this life and the next.

Order a Sparkling White Smiles Custom Teeth Whitening System online and get BIG SAVINGS!
* 10 shades whiter in days!
* Results Guaranteed.
* Better than your dentist, for a fraction of the cost.
* Same strength Teeth Whitening Gel as dentists use.