PAMPLONA: WHERE BULLS
ARE RUN TO THEIR DEATHS

www.huffingtonpost.co.uk - Written by Abi Izzard for PETA UK. Over the next few days, travellers will head to Pamplona, Spain, to participate in the annual Running of the Bulls. Some will lose their nerve; others may be gored. But one thing is for certain: by the end of the festival, every single bull will be dead. In 2006 and 2007, I ran naked through the streets of Pamplona to draw attention to the suffering of bulls used in this festival. I saw for myself how cruelly people treated the bulls, and although the streets were crowded with members of the media, there was hardly any coverage of the ugly truth behind the sound bites. The 30-second snippets never show the bulls as they are whipped and goaded to get them to race out of their holding pens. Pamplona's narrow cobblestone streets are slippery and slick with spilled beer, and the bulls frequently lose their footing and fall, breaking their horns and bones and sustaining cuts and bruises, and drunken revellers hit them with sticks and rolled-up newspapers. At the end of each day, the exhausted bulls are led one by one into the bullfighting arena to fight for their lives, except that it will never be a fair 'fight': from the moment they enter the ring, the bulls have no chance of winning.

Men on horses run them in circles while repeatedly piercing them with spears called banderillas until they are dizzy, weakened from blood loss and in agonising pain. The horses, who are blindfolded, can also sustain serious injuries when they can't avoid a charging bull. Some will have their vocal cords cut so that the crowds can't hear their screams of terror. The matador (Spanish for 'killer') takes over only when the exhausted bull is already near death. After blundered attempts to severe their spinal cord, bulls are often still conscious as their ears and tail are cut off as 'trophies' and as they are dragged from the ring on chains. Then another bull enters the arena, and the horrific cycle starts again. Activists from the animal rights organizations People for the Ethical Treatment of Animals (PETA) and AnimaNaturalis staged a protest against bullfighting in Pamplona Sunday as the city prepared for its annual San Fermin Festival. They spell out the words "Stop Bullfights" with their paint-covered bodies. Most Spaniards are appalled that this archaic blood 'sport' continues in the new millennium and are calling for an end to the carnage. Only sadists will leave a bullfight having enjoyed themselves, but every pound spent means that more bulls will be doomed to die. Bullfighting in Spain is a dying industry which is currently heavily subsidised by the EU.

Each morning for seven days, six fighting bulls tear through the narrow streets and runners sprint alongside them to test their skills and courage. However, each afternoon, the same fighting bulls are ritually slaughtered by Matadors in a stadium of 20,000 people. Curious to see for themselves what a bullfight is really like, travellers buy a ticket or go to one because it's part of their package itinerary. ¡There are so many different kinds of people, when the bull is killed by fighting, the activists say "How horrible" while other are taking pleasure and say "How nice"! 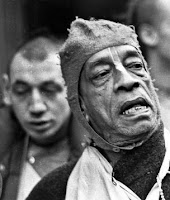 Rāmesvara: It was their sport to see men fight each other until one of them was killed. Their wrestling was based on fighting until someone was killed.
Gargamuni: They would take Christians and put them in the arena.
Rāmesvara: That was their sport, entertainment, just like wrestling in India, but in the Middle East in Roman times the wrestling was fought until somebody had to be killed. That was their entertainment. They wanted to see them die. Even today, actually, all the entertainment in America and the Western world is based on violence. They have bull fighting. They want to see the bull tortured and killed. And they have chicken fighting and they have...
Prabhupāda: Dog fighting.
Rāmesvara: And even the most popular sport in America now is football. It is more popular than baseball, and it’s based on men jumping on each other. While one team is carrying the ball, every... A very violent sport.
Hari-sauri: And boxing also. So many different sports.
Rāmesvara: They are fascinated by pain and fighting.
Prabhupāda: Torture. They like to see that somebody is tortured by another.

If you need your ex-girlfriend or ex-boyfriend to come crawling back to you on their knees (even if they're dating somebody else now) you gotta watch this video
right away...

(VIDEO) Get your ex CRAWLING back to you...?