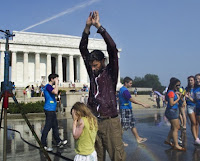 http://abcnews.go.com - Highways buckled across the country, the waters of Lake Michigan were unusually warm for this time of year and even a minor train derailment outside Washington was blamed on heat, but the hot weather gripping much of the country only worsened Saturday. Temperatures of more than 100 degrees were forecast in Philadelphia and excessive heat warnings were issued for several states in the Midwest the days of smothering heat piled on, accompanied by severe storms that have knocked out power from Michigan to the East Coast.
Most notable was last weekend's sudden and severe storm that drenched the mid-Atlantic region, where thousands remained without electricity a week later. At least 24 deaths have been blamed on the heat, and hundreds of thousands remained without power Saturday, mostly in West Virginia, Ohio and Michigan.  At New York City's Penn Station, the air conditioning was falling short of full capacity. The doors were left wide open at a half dozen locations around the two-block-wide underground station. Record temperatures were set Friday in several places, including the Indiana cities of Indianapolis, South Bend and Fort Wayne. 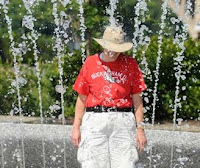 In central Arkansas, Russellville reached 106 degrees, breaking a record set in 1964. The heat was also blamed for at least 24 deaths. Nine people in Maryland have died of heat-related causes in recent days, the state said. Authorities in Chicago said heat was a factor in six deaths there, mostly among older people. Three deaths in Wisconsin, two in Tennessee and one in Pennsylvania were also reported to be heat-related.
In Ohio, a man in his 70s and two women - one in her late 60s, the other in her 80s - were found dead this week, said Dr. Jeff Lee, a deputy county coroner in the central part of the state. He said all three were suffering from heart disease but died from stress caused by high temperatures in their houses. Temperatures inside were stifling, recorded in the 90s in two cases, with windows shut and no ventilation. The houses lacked electricity because of recent power outages. "If they had gotten cooling, we would have expected them to survive," he said.
Relief was on the way in the form of a cold front as the weekend ends, but forecasters expected it to bring more severe weather, too.

Americans dipped into the water, went to the movies and rode the subway just to be in air conditioning Saturday for relief from unrelenting heat that has killed 30 people across half the country, including 9 in Maryland and 10 in Chicago, mostly among the elderly. The heat sent temperatures soaring over 100 degrees in several cities. If people ventured outside to do anything, they did it early. But even then, the heat was stifling.  All efforts in the field of science and technology are to reduce the misery and increase our comforts, but still we are suffering. 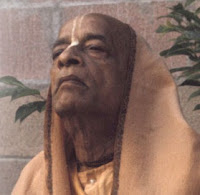 No one can claim that he is not suffering. That is not possible. In this material world, there are three kinds of suffering: adhyātmika, adhibhautika, and adhidaivika. These are miseries arising from the material body and mind, from other living entities, and from the forces of nature. We may suffer mental anguish, or we may suffer from other living entities -from ants or mosquitoes or flies -or we may suffer due to some superior power. There may be no rain, or there may be flood. There may be excessive heat or excessive cold. So many types of suffering are imposed by nature. Thus there are three types of miseries within the material world, and everyone is suffering from one, two, or three of them. No one can say that he is completely free from suffering. We may then ask why the living entity is suffering. The answer is: out of ignorance. He does not think, "I am committing mistakes and am leading a sinful life; that is why I am suffering." Therefore the guru's first business is to rescue his disciple from this ignorance.

Śrīla A. C. Bhaktivedanta Swami Prabhupāda :
"Science of Self Realization"
Chapter 2. "Choosing a Spiritual Master"
"What Is a Guru?"
http://vedabase.com/en/ssr/2