SHACKLED TO A SHRINE FOR BEING MENTALLY ILL 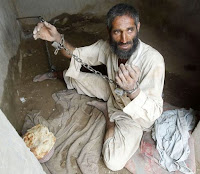 www.smh.com.au - The young man sits nearly naked in a small concrete room, a thick, heavy chain fastened around his ankle and bolted to the wall. Flies swarm around a wound on his wrist where shackles have rubbed the skin raw. His own waste has pooled in the corner, turning the dirt floor into a pungent mud. This is no jail, however, and 23-year-old Jalaludin has committed no crime.
The Mia Ali Baba shrine in east Afghanistan is a holy place and, those who care for it say, spending 40 days here will, God willing, free Jalaludin from his personal prison: mental illness. For 300 years, the shrine keepers here have taken in the mentally ill. They say they are upholding the legacy of their ancestor whom the shrine honours, a holy man by the name of Ali Baba known in this area outside Jalalabad for caring for the mentally ill when they were shunned by others. “This is an obligation for my family but it is also an honour,” said Mia Subadar, one of the shrine's guardians. “Since I have been here, hundreds … have come here and become healthy.” 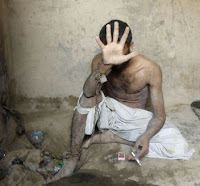 Shrines such as Mia Ali Baba are frowned upon by healthcare professionals and critics, who say they are ineffective and that those who run them prey on vulnerable people's religion and superstitions to make a profit. But in Afghanistan, racked by poverty and decades of war, many do not have access to basic healthcare, let alone facilities for the mentally ill. With the government saying that more than 60 per cent of Afghans suffer psychological disorders from anxiety to depression that leaves a huge void to fill. Those sent here are chained to the walls of the small, windowless rooms. They are fed only water, black pepper and bread. They are not allowed to bathe anything except their faces, hands and feet. Speaking with others is prohibited. If a shrine keeper decides their situation is improving, they may be unchained for a few minutes so they can pray, walk outside or visit a proper bathroom. Mohammad Sadeq, 40, said he did not know specifically what was wrong with him, but he had wild mood swings. “I am a normal person but whenever I come out of the house in my village, the children start shouting 'Look at the crazy man' and they throw stones at me,” he said.

In Jalabad, Afghanistan, it is believed locally that 40 days in chains and with a restricted diet at the 300-year old shrine can cure the mentally ill and those possessed by spirits.  Healthcare professionals consider these Afghan shrines are ineffective but in this impoverished country many do not have access to treatment for the mentally ill or even to basic healthcare, so frustrated families often turn to places like Mia Ali Baba, hoping for a miracle. The prescription is drastic. In Kali-yuga almost all men are asuric, or demoniac and the propensity for mercy is almost nil. 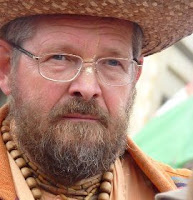 We have to become activists of the good. There is so much garbage, so much cruelty that has to stop. ... Let us put aside all selfish interests. Consciousness is to serve others, and you have to sacrifice something of your own for others’ well-being; many people are suffering in this world. You have the power of change. We want that everyone becomes conscious and teaches by his own example.  We think that the duty of the humanity is to search the truth and to practice it. ... We believe that all people, who have certain knowledge, wealth or some other distinguishing capacity, should be conscious about their personal conduct and be disposed to utilize their advantages to protect and serve those less fortunate.  We believe that mercy, purity, honesty and austerity are the fundamental pillars to build a free, sane and just society. A conscious person should meditate a lot on this truth and try to practice it in his daily life.