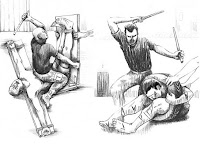 www.cbc.ca/news - The Syrian government is facing fresh allegations of systematic detainment and torture of its citizens, in a report and multimedia presentation released by the group Human Rights Watch. Former detainees and defectors identified the locations of the centres, the methods of torture, and the agencies responsible. The rights organization released sketches by a Syrian artist depicting the abuse. “The intelligence agencies are running an archipelago of torture centres scattered across the country,” said Ole Solvang, emergencies researcher at Human Rights Watch.
“By publishing their locations, describing the torture methods, and identifying those in charge we are putting those responsible on notice that they will have to answer for these horrific crimes.” Human Rights Watch said its report is based on more than 200 interviews with former detainees and defectors conducted since March 2011, when anti-government protests began. A 13-year-old former detainee said interrogators jolted him with electrical currents until he passed out and pulled out his fingernails. Others were subjected to mock executions and sexually assaulted.' 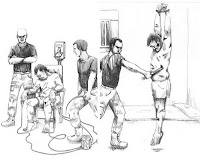 "They hung us by our arms with our bodies suspended in the air and beat us," a young man said. Some described enduring "dulab," in which torturers force the prisoner's legs and head into a car tire before beating them. "People have definitely died as a result of the torture," said David Mepham with Human Rights Watch in London. They have found evidence of at least 27 facilities across the country where tens of thousands of people have faced government-sanctioned abuse. The organization said Syrian President Bashar al-Assad and some of his officials should be tried for crimes against humanity before the International Criminal Court and has asked the UN Security Council to refer the cases to the ICC.
"The systematic patterns of ill-treatment and torture that Human Rights Watch documented clearly point to a state policy of torture and ill-treatment and therefore constitute a crime against humanity." "We hope that the material we provide will further galvanize international action to really put pressure to bear on the Syrians - and that particularly means Russia and China that have blocked action against the Assad government, the group said".

"Basat al reeh." "Dulab." "Falaqa." They are Arabic names for torture techniques that send chills through the hearts of Syrians, particularly the untold thousands who are believed to have been detained during the uprising of the last 15 months. According to the organization Human Rights Watch, the Syrian government has been carrying out "a state policy of torture" as part of an effort to crush dissent throughout the unrest. We must stop this cruelty. We should remember that in our next lifetime we will be subjected to the same injustices we are creating for others today. 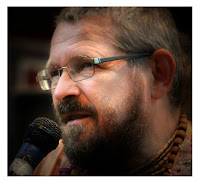 There are reasons why a country, in order to defend their security and to stop injustice and irreligion, may give orders to fight and kill certain persons. That is approved in the Manu samhita. But it is never approved to torture innocent people. That is not only against the intuition we can feel in our heart, it is also totally disapproved by the religious scriptures in the world ...
Srila Prabhupada gives us the reason how it is possible that such things do go on. Since there is such an incredible amount of systematic violence against defenceless animals, and so many other violent crimes committed against unborn babies and other weak sectors of society who cannot defend themselves against the might of unjust rulers, we can understand that in many places of the world, if not to say all the places of the world, people are loading heaps of accumulated negative karmas upon themselves. ... Let us all start to stop unnecessary violence wherever we can.