CHRONIC PAIN IS DETERMINED BY EMOTIONS

www.telegraph.co.uk - Emotions may determine why some people are more likely to suffer chronic pain than others, a study has found. The emotional state of the brain can explain why different individuals do not respond the same way to similar injuries, say scientists. Some recover fully while others remain in constant pain. Brain scan studies showed for the first time how chronic pain emerges as a result of an emotional response to an injury. The process involves interaction between two brain regions, the frontal cortex and nucleus accumbens.
Lead scientist Professor Vania Apakarian, from Northwestern University in Chicago, US, said: ''The injury itself is not enough to explain the ongoing pain. It has to do with the injury combined with the state of the brain.'' The more emotionally the brain reacted to the initial injury, the more likely it was that pain will persist after the injury has healed, he said.  The finding provides a new direction for developing therapies to treat intractable pain. Prof Apakarian added: ''It may be that these sections of the brain are more excited to begin with in certain individuals, or there may be genetic and environmental influences that predispose these brain regions to interact at an excitable level.''

"For the first time, we can explain why people who may have the exact same initial pain either go on to recover or develop chronic pain,"  explain Prof Apakarian. The research involved 40 volunteers who had all suffered an episode of back pain lasting one to four months. Four brain scans were carried out on each participant over the course of one year. The results, published in the journal Nature Neuroscience, made it possible to predict with 85% accuracy which individuals would go on to develop chronic pain. The nucleus accumbens teaches the rest of the brain how to evaluate and react to the outside world.
Prof Apakarian said it may use the initial pain signal to teach other parts of the brain to develop chronic pain. ''Now we hope to develop new therapies for treatment based on this finding,'' he added. An estimated 30 million to 40 million U.S. adults suffer from chronic pain. Back pain is the most prevalent chronic pain condition. "Chronic pain is one of the most expensive health care conditions in the U.S., yet there still is not a scientifically validated therapy for this condition," Apkarian said. Chronic pain costs an estimated $600 billion a year, according to a 2011 National Academy of Sciences report.

When people have similar injuries, why do some end up with chronic pain while others recover and are pain free?  A new study finds that the brain's emotional reaction to the injury is crucial to either lead to recover or develop chronic pain. Emotions are a key factor in determining how a person reacts and feels while he is in pain. The more emotionally the brain reacts to the initial injury, the more likely the pain will persist after the injury has healed. Unless we reach the spiritual platform, we experience both bodily pleasure and pain on this material platform. 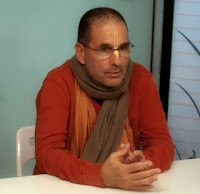 In the Bhagavad-gita Arjuna's mind was disturbed due to being attached to sense objects in the form of his relatives. ... Because the self is the witness of the many changes of the mind, such as happiness and distress, it must be different from them and changeless, for an entity subject to change cannot be a witness of that change. As the self is different from the gross body, so too is it different from the subtle body, which consists of various states of the fluctuating mind. The experience of happiness and distress differs from that of heat and cold inasmuch as heat and cold can be either enjoyable or distressful, whereas happiness and distress remain the same. ... All of these experiences are relative to the mind's wedding with the senses and their apprehension of sense objects. That which is at one time hot may be cold at another. That which brings happiness may later be the cause of distress. These mental perceptions create a world in which the self lives without knowledge of itself, in the world of the mind. The first step out of this small world is theoretical knowledge followed by tolerance.