MALAYSIAN WOMAN TO BE CANED FOR DRINKING BEER IN PUBLIC 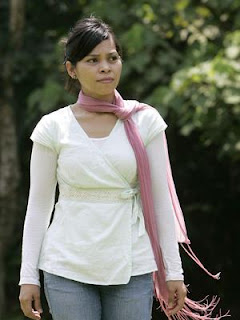 SUNGAI SIPUT, Malaysia (Reuters) - A Malaysian Muslim woman, named Kartika Sari Dewi Shukarno, a Singapore resident, will be caned next week for drinking beer has defiantly asked that the punishment be carried out in public in a case that is fueling debate about tolerance in this multi-racial country. She said the 20-month ordeal added to her distress, but she respected the law banning alcohol for Muslims and was determined to go through with the punishment - six strokes of the cane. The mother of two, who also paid a 5,000 ringgit ($1,420) fine, asked for the punishment, usually carried out in a closed prison, to be done in public. Islam is the official religion in this country that has a dual-track legal system, with Islamic criminal and family laws applicable to Muslims alongside civil legislation. Despite the prohibition, Muslims can be found consuming alcohol in bars and nightclubs openly in cities such as the capital, Kuala Lumpur, where attitudes are more relaxed.

Religious authorities caught Kartika, a Malaysian citizen married to a Singaporean, drinking at a hotel in Kuantan, on December 11, 2007. Mohamad Isa Abd Ralip, president of the Syariah [Shariah] Lawyers' Association of Malaysia, said too much is being made of Kartika's punishment. "It is not about causing pain. It is about educating others and to teach the person a lesson," he said. The recipient is fully clothed and the flogger cannot raise his arm high, Mohamad Isa said. The blows are delivered using a thin stick, so that they don't break the skin. Kartika, who said she has yet to receive any response to her request for a public caning, is due to be taken to prison in central Selangor state beginning on Monday for one week, during which her sentence will be carried out. She will be fully clothed and kneeling and struck on the backside with a small thin cane using moderate force.

WHAT DO THE VEDIC TEACHINGS TELL US?
In every civilized human society there is some set of scriptural rules and regulations which is followed from the beginning. Especially among the Āryans, those who adopt the Vedic civilization and who are known as the most advanced civilized peoples, those who do not follow the scriptural injunctions are supposed to be demons. ... Actually, a woman should be given protection at every stage of life. She should be given protection by the father in her younger days, by the husband in her youth, and by the grownup sons in her old age. This is proper social behavior according to the Manu-samhitā.

A further understanding to be derived from this example is that a woman, however powerful she may be in the material world, must be given protection, for as soon as she is unprotected she will be exploited by Rāksasas like Rāvana. Here the words vaideha-rāja-duhitari indicate that before mother Sītā was married to Lord Rāmacandra she was protected by her father, Vaideha-rāja. And when she was married she was protected by her husband. Therefore the conclusion is that a woman should always be protected.