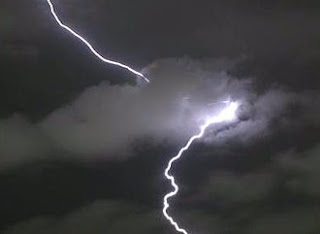 CALCUTTA, India (AP) - Officials say at least 11 people have been killed and 15 others seriously injured after being struck by lightning in eastern India. The deaths occurred in two separate incidents Tuesday in Burdwan district in West Bengal state. The area is 75 miles (120 kilometers) northwest of the state capital, Calcutta.

Local government official Rajesh Singh says nine people, including four children, were killed as they ate lunch inside a room during a thunderstorm, and two others died as they worked in their fields the same afternoon. He says the injured are being treated for burns at a local hospital.

WHAT DO THE VEDIC TEACHINGS TELL US?
The way of devotional service is neither sentimental nor mundane. It is the path of reality by which the living entity can attain the transcendental happiness of being freed from the three kinds of material miseries — miseries arising from the body and mind, from other living entities and from natural disturbances. Everyone who is conditioned by material existence — whether he be a man or beast or demigod or bird — must suffer from ādhyātmika (bodily or mental) pains, ādhibhautika pains (those offered by living creatures), and ādhidaivika pains (those due to supernatural disturbances). His happiness is nothing but a hard struggle to get free from the miseries of conditional life. But there is only one way he can be rescued, and that is by accepting the shelter of the lotus feet of the Supreme Personality of Godhead.