1,300 CHILDREN GET LEAD POISOING
FROM FACTORY IN CHINA 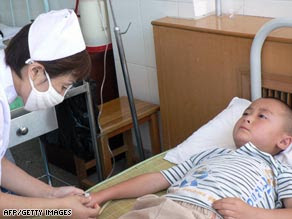 BEIJING — More than 1,300 children have been poisoned by a year-old manganese factory in central China, the state media reported today, amid national fears about the prevalence of heavy metal pollution. The exposure of mass lead contamination in Wenping township, Hunan province, is the second case in as many weeks, prompting accusations that the authorities have failed to adequately regulate toxins that build up over time. A local government official told the Xinhua news agency that tests of children living nearby showed that 60% to 70% had unhealthy levels of lead in their blood. The authorities closed the factory last week and detained two executives on suspicion of "causing severe environment pollution".

The plant, which is within 500 metres of a primary school, a middle school and a kindergarten, and although the factory had been operating for only a year, 1,354 children were found to have more than 100 mg of lead per litre of blood, the limit considered safe. A gradual build-up of lead in the bloodstream can lead to anaemia, muscle weakness and brain damage. The report of poisoning in Wugang followed a similar incident in Shaanxi province, in north-central China, where state news reports say 851 children living near the nation’s fourth-largest smelter have tested positive for lead poisoning since early August. Pollution is a serious problem across China, where breakneck industrial development has fouled both air and water to sometimes extraordinary degrees. Although the national government has committed to cleanup measures, the World Bank says 59 percent of the water in China’s seven major rivers is unfit to drink, and the government says that the air in about a quarter of cities is unhealthy.

WHAT DO THE VEDIC TEACHINGS TELL US?
There is enough of everything by the will of the Lord, and we can make proper use of things to live comfortably without enmity between men, or animal and man or nature. The control of the Lord is everywhere, and if the Lord is pleased, every part of nature will be pleased. The river will flow profusely to fertilize the land; the oceans will supply sufficient quantities of minerals, pearls and jewels; the forest will supply sufficient wood, drugs and vegetables, and the seasonal changes will effectively help produce fruits and flowers in profuse quantity. The artificial way of living depending on factories and tools can render so-called happiness only to a limited number at the cost of millions. Since the energy of the mass of people is engaged in factory production, the natural products are being hampered, and for this the mass is unhappy. Without being educated properly, the mass of people are following in the footsteps of the vested interests by exploiting natural reserves, and therefore there is acute competition between individual and individual and nation and nation. There is no control by the trained agent of the Lord. We must look into the defects of modern civilization by comparison here, and should follow in the footsteps of Mahārāja Yudhisthira to cleanse man and wipe out anachronisms.
Srila A.C. BV Swami Prabhupada:
"The Srimad Bhagavatam - Purport in Canto 1 - Chapter 10 - Verse 5"
Publicado por dasavatara das en 7:54 AM