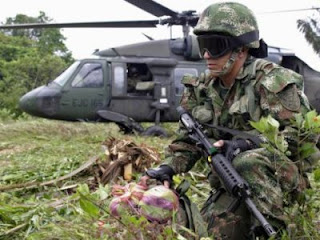 Bogota - (EFE) At least 17 rebels of the Revolutionary Armed Forces of Colombia (FARC) were killed when the security forces bombed one of their hideouts in the country’s central Meta province, officials said. There were 200 FARC guerrillas at the camp when the attack took place, a defence ministry spokesman said Monday, without elaborating on the fate of the other rebels. Media reports said the security forces have launched a major operation against the rebels, mainly to capture FARC’s 27th Front commander Efren Arboleda. The operation was hampered due to the bad weather, reports said.

In a separate development, the army and the air force have launched an operation against the rebels in southern Caqueta province. The main target is the chief of FARC’s 49th Front, Wilson Pena Maje. Gen. Javier Florez, commander of the Joint Task Force Omega, said his soldiers have killed at least 40 militants in clashes in eastern Colombia in recent weeks. FARC, the country’s largest leftist group, has fought with successive Colombian governments since mid-1960s. The group is thought to have around 9,000 fighters.


WHAT DO THE VEDIC TEACHINGS TELL US?
Moreover, one should always think oneself dependent on Krishna. This is Krishna consciousness. One should always think, "Without Krishna my life is useless, and I am in danger." Therefore, while offering her prayers to Krishna, Kuntī says, "Krishna, You are thinking that now we are safe, but I don't think we are safe. We are always in danger. If You think we are safe, who will give us protection? We have no protection other than Your lotus feet. We are encircled by so many enemies because the sons of those who have died in the fight are now preparing to fight with us." Now, although Krishna had come to Kuntīdevī to take the dust of the feet of His superior, His aunt, Kuntīdevī addresses Him as Prabhu, the Lord, not as her beloved nephew. She knows, "Although Krishna is playing the part of my nephew, my brother's son, He is still the supreme master."

The symptoms of a really Krishna conscious person are that he knows that Krishna is the supreme master, he always thinks himself in danger without Krishna, and by taking shelter of Krishna's lotus feet he always feels safe. Krishna says, kaunteya pratijānīhi na me bhaktah pranaśyati: "You may declare to the world that My devotee is never vanquished." (Bg. 9.31) If one becomes a pure devotee of Krishna, there is no question of danger. Of course, Krishna gives protection to everyone, for without His protection no one can live even for a single moment.