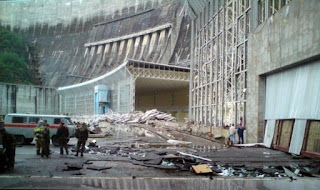 MOSCOW — Divers Tuesday searched flooded wreckage for 64 people still missing after an accident at Russia's biggest hydroelectric plant but officials admitted that the chances of finding survivors were dwindling. The Sayano-Shushenskaya power station is one of the most powerful in the world with a capacity of 6.4 million kilowatts an hour, and the catastrophe at this plant in the Khakassia region of Siberia - which investigators believed was caused by a sudden increase in water pressure - is already confirmed to have left 12 people dead.

The pressure increase is believed to have caused a massive flood in the turbine room at a time when a hundred people were working there although investigators have emphasised final conclusions have not been reached. "Unfortunately we have no comforting news. We still do not know the fate of over 60 people, the territory above water and under the water is being searched. We are awaiting a robot, which is able to work underwater. Three groups of divers are now working under the water," Russian emergencies situations minister Sergei Shoigu said. Vasily Zubakin, acting chairman of the plant's operator RusHyrdro, confirmed that 64 people were still unaccounted for. He said it was highly unlikely that the accident, caused by a rupture of water pipes in one of the plant's power units, was due to any kind of terror act, saying "we regard a technical breakdown as the cause". Vladimir Markin, a spokesman for the investigative committee of prosecutors, also said investigators "had not found any explosive substances at the scene of the disaster" and ruled out terror as an explanation, but he said that a criminal inquiry had been opened for neglecting the rules of safety at work.

WHAT DO THE VEDIC TEACHINGS TELL US?
In this material world, everyone is trying to counteract the onslaught of material nature, but everyone is ultimately fully controlled by material nature. Therefore even though so-called philosophers and scientists try to surmount the onslaught of material nature, they have not been able to do so. Krishna says in Bhagavad-gītā (13.9) that the real sufferings of the material world are four — janma-mrityu jarā-vyādhi (birth, death, old age and disease). In the history of the world, no one has been successful in conquering these miseries imposed by material nature - prakriteh kriyamānāni gunaih karmāni sarvaśah [Bg. 3.27]. Nature (prakriti) is so strong that no one can overcome her stringent laws.