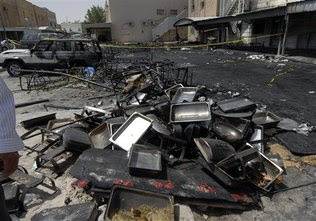 Kuwait - The ex-wife of a groom at a Kuwaiti wedding party has admitted starting a blaze that engulfed a tent, killing 46 women and children. The 23-year-old told police she poured petrol around the packed wedding tent and set it on fire to avenge her ex-husband's "bad 'treatment" of her before their divorce, Kuwait's Al-Qabas newspaper said on Monday. Kuwaiti officials say the blaze that tore through a wedding tent and killed 46 women and children was a criminal act motivated by "personal reasons". Authorities said Monday they have identified the perpetrator, who confessed to the crime. Local newspapers report the arsonist is the groom's former wife. Two victims who were hospitalized with severe burns from Saturday's fire died Sunday, bringing the death toll to 46.

Authorities say forensics experts are working to identify the other 35 women and six children killed in the fire, since many of the bodies were burned beyond recognition. The bride escaped injured, but her mother and sister were killed. A place of joy turned into a prison of horror as many of the victims were trampled in the panicked rush to flee the tent filled with women and children. Reports say the blaze took only minutes to destroy the tent.Wedding parties in Kuwait, a conservative Muslim country, are held separately for men and women. Children attend the women's event. At least 57 people were injured in the disaster, which occurred late Saturday in Jahra, west of Kuwait City.

Srila A.C. BV Swami Prabhupada:
"Bhagavad-gita As It Is - Purport in Chapter 3 - Verse 37"

"The devotees of the Lord are so forbearing that even though they are defamed, cheated, cursed, disturbed, neglected or even killed, they are never inclined to avenge themselves."