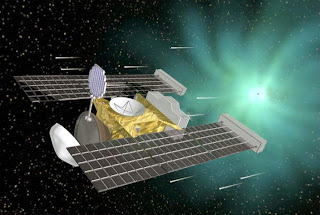 BBC News - NASA astronauts have discovered one of the fundamental chemical buildings blocks of life, an amino acid, glycine, essential for life on earth, in a comet, confirming a long-held theory that the building blocks for life came from outer space. That’s exciting because it suggests other comets and extraterrestrial bodies are flinging the essential amino acids around the galaxy, raising the possibility that life may well have developed elsewhere. “Our discovery supports the theory that some of life’s ingredients formed in space and were delivered to Earth long ago by meteorite and comet impacts.” they said. Glycine is an amino acid found in proteins, the sophisticated molecules that organisms use to build and maintain their systems. It was detected in the material ejected from Comet Wild-2 and grabbed by Nasa's Stardust probe.

“The discovery of glycine in a comet supports the idea that the fundamental building blocks of life are prevalent in space, and strengthens the argument that life in the universe may be common rather than rare,” said Carl Pilcher, director of NASA’s Astrobiology Institute. Glycine has been detected in meteorites before and there are also observations in interstellar gas clouds claimed for telescopes, but the Stardust find is described as a first in cometary material. The Nasa spacecraft flew past the 5km-wide icy Comet 81P/Wild-2 in January 2004. The probe swept up particles fizzing off the object's surface as it passed some 240km (149 miles) from the comet's core, or nucleus. These tiny grains, were then returned to Earth in 2006 in a sealed capsule. Distributed among the world's leading astro-labs, the specimens have since been giving researchers a remarkable insight into the conditions that must have existed in the earliest phases of the Solar System when planets and comets were forming.

WHAT DO THE VEDIC TEACHINGS TELL US?
The material world is only one fourth of the Supreme Personality of Godhead's creation, but it is unlimited and impossible for anyone to know or describe, even with the qualification of a life as long as that of Brahmā, who lives for millions and millions of years. ... Śrīla Śukadeva Gosvāmī admitted that to give full details of this expansive material universe would be impossible, but nevertheless he wanted to give the King as much knowledge as he had received through the paramparā system. We should conclude that if one cannot comprehend the material expansions of the Supreme Personality of Godhead, one certainly cannot estimate the expansiveness of the spiritual world.
Srila A.C. BV Swami Prabhupada:
"The Srimad Bhagavatam - Purport in Canto 5 - Chapter 16 - Verse 4"
Publicado por dasavatara das en 7:38 AM