AT LEAST 22 DEAD IN PAKISTAN BOMBING 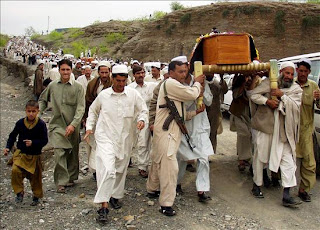 JAMRUD, Pakistan, (Reuters) - A suicide bomber killed 22 Pakistani border guards on Thursday in an attack at the main crossing point into Afghanistan, government officials said. It was the first big attack in Pakistan since Pakistani Taliban chief Baitullah Mehsud was killed in a U.S. missile strike on Aug. 5 and will raise fears that the militants, who officials say have been in disarray, are hitting back. The bomber struck as the guards were sitting down at sunset to break their daily fast for the Muslim holy month of Ramadan. "The guards were about to break their fast when a teenaged boy carrying a bottle of Pepsi walked towards them and blew himself up," said Wakil Khan, a witness at the Torkham border crossing.

Pakistan has been hit by a series of suicide bomb attacks over the past two years, launched by al Qaeda-linked militants fighting the government because of its support for the U.S.-led campaign against Islamist militancy. Security forces have cleared most militants from the Swat valley, northwest of Islamabad, in an offensive since late April, and have also been attacking Mehsud's men in the South Waziristan region on the Afghan border. Earlier on Thursday, two missiles believed to have been fired by a U.S. drone struck a militant hideout killing six fighters in South Waziristan, intelligence officials said. The Taliban had been denying Mehsud's death for weeks, but on Monday two of his aides, Hakimullah Mehsud and Wali-ur-Rehman, confirmed their leader had been killed. Security officials have been saying they were expecting reprisal attacks by Hakimullah's men and Thursday's blast in Khyber would appear to indicate he is determined to press on with the fight against the government.

WHAT DO THE VEDIC TEACHINGS TELL US?
The material body, whether in the higher or lower planetary system, is destined to die. In the lower planetary system or lower species of life one may die soon, and in the higher planets or higher species one may live for a long, long time, but death is inevitable. This fact should be understood.
Srila A.C. BV Swami Prabhupada:
"The Srimad Bhagavatam - Purport in Canto 9 - Chapter 13 - Verse 10"
We are always in danger because at any moment death can take place. It is not that only Gajendra, the King of the elephants, was afraid of death. Everyone should fear death because everyone is caught by the crocodile of eternal time and may die at any moment. The best course, therefore, is to seek shelter of Krishna, the Supreme Personality of Godhead, and be saved from the struggle for existence in this material world, in which one repeatedly takes birth and dies. To reach this understanding is the ultimate goal of life.
Srila A.C. BV Swami Prabhupada:
"The Srimad Bhagavatam - Purport in Canto 8 - Chapter 2 - Verse 33"
Publicado por dasavatara das en 8:31 AM