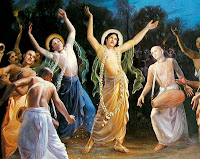 www.goldcoast.com.au - Yesterday, Krishna devotees celebrated the Gaura Purnima festival 2012.  Hundreds of devotees made their way to the Hare Krishna farm near Murwillumbah yesterday to celebrate one of the movement’s major festivals of the year. The festival of Gaura Purnima - also known as the Golden Full Moon - celebrates the birthday of Sri Caitanya Mahaprabhu in West Bengal some 500 years ago, whom followers believe to be the reincarnation of Krishna, appearing as His own devotee. Sri Caitanya introduced the practice of devotional chanting which has been made famous by the Hare Krishnas in recent times as a means to enlightenment. Malini Durr, spokeswoman for the Hare Krishna farm at Eungella, which is home to around 70 people, said after a day of fasting and chanting, followers would gather at the main temple to celebrate before eating at moonrise. 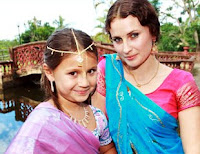 The festival is observed annually (usually in February or March) by Krishna devotees all over the world - especially in the area of Mayapur, India, the place where He appeared in the year 1486.  “We fast until moonrise and have spent all day preparing through bhakti yoga,” Malini said.  Farm resident Nrsimha Kavaca Dasa, the global movement’s most senior priest who travels around the world training and inspiring its 5000 priests, said the festival was of great importance to followers. “This is a great day, it’s like New Year’s Day for us,” Nrsimha said. “Lord Caitanya taught us the process of spiritual realisation through chanting. It is an easy process which anyone can do. It is the process of this age, where people are more materially-centred.” Also in attendance as a speaker was Mukunda Goswami, one of the original members of the Hare Krishnas who became a disciple of the movement’s in New York in the mid 1960s.

Gaura-purnima means “Golden Full Moon”, a reference to Sri Caitanya Mahaprabhu.  It is a Gaudiya Vaisnava festival that occurs in March celebrating the divine appearance of Sri Caitanya Mahaprabhu who is Krishna Himself, appearing as His own devotee, to teach people that we can gain full enlightenment simply by chanting the holy names of the Lord.  One who sees Lord Caitanya to be different from Krishna is under the illusory energy of the Lord.

Vrajanatha: What is the final destination of the soul who is a devotee of Lord Gaura-kisora (Lord Chaitanya)?
Babaji: Krishna and Gaura-kisora are not different. They are both shelters of the feature of sweetness (madhurya-rasa). They do have one difference. Madhurya-rasa (the Lord’s sweetness) has two features: 1. madhurya (sweetness), and 2. audarya (mercy). When sweetness is prominent, Lord Krishna is manifested. When mercy is prominent, Lord Gauranga is manifested. The spiritual world of Vrindavan is divided into two abodes: 1. the abode of Lord Krishna, and 2. the abode of Lord Gaura. The eternally perfect and eternally liberated souls who have sweetness first and mercy second reside in Lord Krishna’s abode. They are Lord Krishna’s associates. The eternally perfect and eternally liberated souls who have mercy first and sweetness second reside in Lord Gaura’s abode. They are Lord Gaura’s associates. ... This truth: that Lord Gaura and Lord Krishna are simultaneously one and different from each other, is a very confidential secret.
Śrīla Bhaktivinoda Thakur :
Jaiva-dharma (The Universal Religion)
Ch. 17: Nitya-dharma O Sambandhabhidheya Prayojana
Eternal Religion and Sambandha, Abhidheya and Prayojana
(The Souls Free From Maya’s Prison)
http://bvml.org/SBTP/index.htm  -  http://bvml.org/SBTP/JD/index.html#17
Publicado por dasavatara das en 8:21 AM