http://timesleader.com - Pope Benedict XVI followed in the footsteps of his predecessor’s groundbreaking trip to Cuba on Monday, hoping to renew the faith in Latin America’s least Catholic country. Cuban President Raul Castro came to the airport in the eastern city of Santiago to welcome Benedict, just days after the pope declared the island’s Marxist system outdated. Unlike in Mexico, where multitudes showed up to greet the pope at the airport, normal citizens were kept away from Cuba’s tightly controlled arrival ceremony. The pontiff was scheduled to rally tens of thousands of believers at an outdoor Mass in the colonial city’s main square on a blue-and-white platform crowned by graceful arches in the shape of a papal miter. Then he was to spend the night beside the shrine of Cuba’s patron saint, the Virgin of Charity of Cobre.

Benedict’s three-day stay in Cuba will inevitably spark comparisons to John Paul II’s historic 1998 tour, when Fidel Castro traded his army fatigues for a suit and tie to greet the pope at Havana’s airport and where John Paul uttered the now-famous words: “May Cuba, with all its magnificent potential, open itself up to the world, and may the world open itself up to Cuba.” But with his first trip to Mexico, Benedict appeared to lay to rest the impression that he is a distant, cold pontiff who can never compete with the charisma and personal connection forged by his predecessor. The welcome is likely to be less fervent in Cuba, where only about 10 percent of the people are practicing Catholics. Still, the government is helping bring out crowds by laying on special transportation and giving residents a paid day off to attend the Mass in Santiago, and another on Wednesday in the capital.

After four busy days in Mexico, Pope Benedict XVI is in Cuba.  Cuba's single-party, Communist government never outlawed religion, but it expelled priests and closed religious schools after Fidel Castro's takeover of Cuba in 1959.  With the collapse of communism around the world, economic hardships at home, and the gentle nudging of the Vatican, restraints on religion have eased. Still, while most Cubans say they're Catholic, very few practice their faith. But what is Faith (Sraddha)? 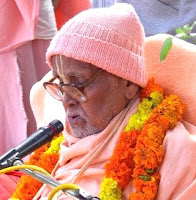 Sraddha is of two kinds: (1) Laukik, conventions and (2) Sastriya, born of real understanding of the esoteric meanings of the scriptures. Laukik Sraddha, leaning towards Karma, Jnana and Yoga, is faltering. The positive feature of Sraddha is an antecedent, to devotion by consecrating fruits of action to the Supreme Lord Vishnu. The faith is strengthened gradually by the association with Sadhus of Bhakti cult. Sastriya Sraddha is expressed itself as (a) Saranagati, self surrender, (b) unconcerned in lesser gain (c) relishing interest in hearing and chanting about the Lord, (d) extraordinary reverence for spiritual objects such as Vaishnavas, Brahmins, Mahaprasad, Sri Murties and Govind Nam. Sraddha or faith is a mental attitude and hence is not a part of Bhakti which consists of devotional activities.
Śrīla Bhakti Vaibhava Purī Mahārāj:
“Sri Chaitanya Mahaprabhu”
Śrī Krishna Chaitanya Mission
Sri Bhaki Bigyan Nityananda Book Trust
http://srilapurimaharaja.org/
http://www.purimaharaj.com/GuruMaharaj.htm