www.cbsnews.com - Hugo Chavez, president of Venezuela for the last 14 years, died Tuesday following his treatment for cancer. His death was announced by the country's vice president Nicolas Maduro, ending a months-long period of speculation surrounding his health - a period often marked by secrecy and rumor. He was 58. The popular but controversial leader had won his fourth presidential term in 2012 but was never sworn in due to his failing health.
The career military officer-turned-politician won friends and enemies as he launched poverty-fighting programs, nationalized key industries and forged alliances with other leftist leaders in Latin America - particularly the Castro brothers in Cuba. The Associated Press reported that Maduro will serve as interim president and that elections will be called within 30 days, Foreign Minister Elias Jaua told the Telesur network.

Just hours before Chavez' death was announced, Venezuelan Vice President and Chavez chosen successor Nicolas Maduro suggested the fatal cancer may have been introduced by "enemies" and declared two U.S. diplomats persona non grata accusing them of trying to organize government opposition among the Venezuelan military. Chavez's political development took him from social democracy to what he called "Socialism of the 21st Century."
His opponents, mostly from the upper-middle class and the wealthy, accused him of becoming a dictator in the mold of his mentor, Fidel Castro, who Chavez once described as being like a father to him. Chavez supported Latin American and Caribbean cooperation and developed close ties with Evo Morales in Bolivia, Rafael Correa in Ecuador and Daniel Ortega in Nicaragua, in addition to Fidel and then Raul Castro in Cuba.

With the passing of Venezuela's President Hugo Chávez, at age 58, a chapter on one of the most controversial modern leaders in Latin America has come to a close. Chavez loudly opposed the United States and claimed capitalism was destroying the world and tried to transform Venezuela into a socialist state. Despite criticism that his government has received, there is no doubt that Chavez was an exceedingly popular leader, especially among poor and working class Venezuelans. Since our life in this material world is very short, we must strive to occupy our minds with God issues and our future spiritual life because at any time - even if you don't want it - we will be forced to leave here. 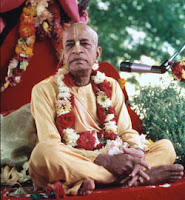 Our duration of life is not very long, and there is no certainty of when we shall be ordered to leave everything for the next stage. ... A living being is eternal by constitution. He is, so to speak, in the whirlpool of birth and death due to his contact with material energy. Freed from such material energy, a living entity is liberated and is eligible to return home, back to Godhead. Those who want to live forever without changing their material bodies should not waste valuable time with topics other than those relating to Lord Krishna and His devotees. ... Every human being dislikes meeting death, but he does not know how to get rid of death. The surest remedy for avoiding death is to accustom oneself to hearing the nectarean pastimes of the Lord as they are systematically narrated in the text of Śrīmad-Bhāgavatam. It is advised herein, therefore, that any human being who desires freedom from death should take to this course of life as recommended by the rishis headed by Śaunaka.