The Hindu - Times of India - Last week, Mahasivaratri was celebrated with piety and religious fervour at various Saivite shrines in many places of the world. The Chittoor district boasts of over a dozen important temples dedicated to Lord Siva, the prominent one being Srikalahasti, revered as ‘Dakshina Kashi’. As is the age-old practice, several devotees took a holy dip in the Swarnamukhi river and offered prayers with wet clothes at the Srikalahasti temple. Many women preferred to perform ‘Angapradakshinam’ (bodily rolling around the temple).
The deities of Lord Sri Kalahastheeswara and Goddess Gnana Prasunambika were taken in a colourful procession respectively on ‘Indra Vimanam’ and ‘Chapram’ in the morning and on Nandi and Simha Vahanams in the evening. The famous ‘Lingodbhavam’ was performed at the next day.

Also last week, Siva temples across Visakhapatnam district came alive with teeming devotees offering special prayers for Maha Sivaratri. In the Port City, a gigantic Sivalingam made of 1.08 crore small Sivalingams, set up at the RK Beach drew thousands from all parts of the city and its surrounding areas. The Sivalingam was installed by the TSR Seva Peetham as part its 28th Maha Sivaratri Kumbhabhishekham. Another major attraction was a eight pushpa-lingam (made of flowers) put up at the Viswapriya Function Hall on Beach Road by the Brahma Kumaris.
The ancient temples of Lord Siva at Draksharamam, Rajahmundry, Pithapuram, Kotipalli, Raali and Samalkot in East Godavari district, Kotilingeswara Swamy temple and Sri Mukhalingam in Srikakulam district, Ramatheertham and Punyagiri in Vizianagaram district and Vysakheswara temple, Appikonda and Lova in the district also saw a large number of devotees gathering to celebrate Sivaratri.

Last week, Maha Sivaratri was observed with religious fervor across all the world with various thousands of devotees thronging many Siva temples since the wee hours. The crowd of devotees swelled towards the evening when special alankaram and poojas were performed. Devotees patiently waited for hours together to have a glimpse of the Lord and also witnessed the alankarams. People offered milk and tender coconuts for the abhishekam. Sivaratri is the most important festival and it is believed that a devotee who sincerely worships Lord Siva on this auspicious day will be absolved of his or her sins. The day is also marked by fasts and prayers to the Lord who is also known as Mrityunjaya - the bestower of the boons of sound health, long life, prosperity, wealth contentment and peace. 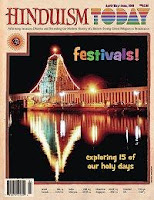 Mahasivaratri is the most important festival dedicated to Lord Siva. This holy day is observed by millions of Hindus all over the world. It is one of Hinduism's most esoteric holy days, when yoga practices, mantras and meditation take the devotee closer to God's essence within the core of himself. Hindus typically fast, maintain silence and stay up all night to perform spiritual practices, such as worshiping, chanting and singing. ... Staying awake through the night is a sacrifice and a break from life's normal routine, a time out of time to be with God within, to reach for the realization of our true, immortal Self. Siva is known as Abhisheka Priya, “He who loves sacred ablutions,” and thus many temples and home shrines have water always dripping on the Sivalinga. On this special night, Sivalingas are bathed with special substances, sometimes several times. Mahasivaratri occurs on the night before the new moon in February/March.