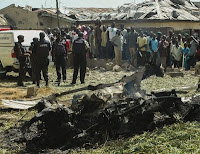 www.bbc.co.uk - At least ten people have been killed and dozens injured in a suicide bombing during Mass at a Catholic church in northern Nigeria, officials say. An explosive-laden vehicle drove into the church and detonated its load, ripping a hole in the wall and roof. The attack happened in Kaduna, which has been targeted by Islamist militant group Boko Haram in the recent past.
President Goodluck Jonathan promised to “redouble” his government's efforts to tackle terrorism and violence. He called the attack part of an “unfortunate and unacceptable trend that threatens the peace and stability of our nation”.
A spokesman for the local governor has called for calm, pleading with people on local radio not to retaliate. Authorities said that Christian youths attacked a vehicle that had come to rescue survivors after the attack, smashing one of the windows. 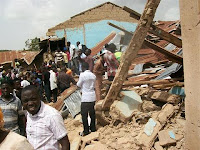 Unconfirmed reports said at least two people were killed in reprisal attacks by Christians after the bombing. No group has said it carried out the bombing. The attack happened at St Rita's church in the Malali neighbourhood of the city. The vehicle had been stopped at the security gate outside the church. The driver initially reversed, but then careered straight through the church wall and detonated the bomb. Members of the choir are thought to be among the dead and injured.
The church was surrounded by soldiers and police after the blast, and ambulances were taking the injured to hospital.
Nigeria's north has a large Muslim majority whereas the south is most populated by Christians and those who follow traditional religions.  Kaduna is on the dividing line between the two areas. The BBC's Will Ross in Kaduna says many people have come to the city in recent months in search of sanctuary from violence in other parts of northern Nigeria.

A suicide bomber rammed an SUV loaded with explosives into a Catholic church holding Mass on Sunday in northern Nigeria. The church attack left at least seven people dead in addition to the bomber, while at least three people were killed and more than 100 others were wounded in reprisal violence in the city. Islamist militant group Boko Haram is fighting to overthrow the government and impose the sharia, an extreme form of Islamic law. The group has said it carried out previous attacks on churches in Kaduna state in June. At least 50 people were killed in the bombings and the reprisals that followed. Religious intolerance should always be avoided, it is the source of hatred and sectarian violence against other manifestations of faith toward God. 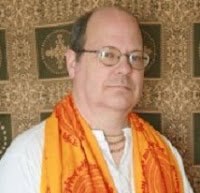 Dharmists (those who follow Sanatana-dharma, the Vedic path) often welcome other religions, as in the way we have seen so many that have settled in India and made it their home, such as Christianity, Islam, Buddhism, the Parsis, Jews, Zoroastrians, Sikhs, Baha’i, etc. While Christians and Muslims, on the other hand, have a vast history of destroying any other culture or people in whichever land they invaded. This is a profound difference that history cannot deny. Intolerance kills.  So, we can see the liberality, kindness and openness of Dharmists, yet in any Muslim country, they allow but one religion to flourish, and any other religion must practice undercover, or they are persecuted and driven out or even thrown into prison, just as we are seeing many Hindus and Christians being driven out of Pakistan, Bangladesh, Saudi Arabia, etc.