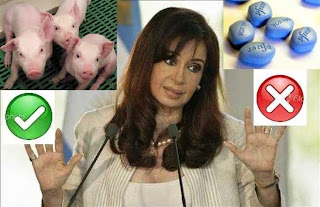 BUENOS AIRES - Argentina's president thinks eating pig meat is really sexy. Eating pork is better than popping a Viagra pill to spice up your sex life, according to Argentine President Cristina Kirchner, who claims to have tested the theory. Many people in this beef-loving nation reacted with surprise last week after Cristina Fernandez promoted pork in a speech during which she not only said pork is better than Viagra, but suggested she's personally proven it. "I didn't know that eating pork improved sexual activity," Fernandez said in a meeting with representatives of the swine industry. She even joked that "it was all good" after she enjoyed some pork with her husband, former President Nestor Kirchner. "Pork consumption improves sexual activity," Kirchner informed a surprised gathering of business people at a meeting at the presidential palace. "This is not a small detail," she said at the gathering to announce a reduction in the price of pork. "Besides, some nicely grilled pork is much more gratifying than taking Viagra." Kirchner said she ate some roasted pork over the weekend with her husband, former president Nestor Kirchner, at the couple's retreat in Argentina's bucolic southern Patagonia region, with "impressive" results. "We were in high spirits the whole weekend," she said, smiling. "I'm a pork fanatic," she added, "and I'm not saying this just to impress you, or for self-promotion." The president's half-joking speech in which she announced subsidies for the pork industry won prominent play on television and radio stations, prompting discussions on whether Argentines should add more pork to their diet.

The approved subsidies will intend to keep the price of pork low despite inflation, and her government has also recently subsidized red meat producers after beef supplies sharply declined in the South American country. Argentines are among the world's biggest consumers of red meat, and most people here stubbornly reject the idea of replacing beef with chicken, pork or other meats. Argentines are great voracious beef eaters, with an annual per capita consumption of between 68 and 73 kilos, and despite Argentina is lying along rich South Atlantic fisheries, seafood is rarely seen on dinner tables.

The video can be watched in
http://pariksit.net/consejos-de-la-presidenta-118.html
WHAT DO THE VEDIC TEACHINGS TELL US? 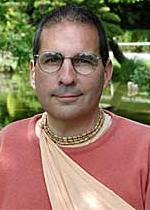 It is understood that as people learn more about Krishna, they will want to change their lives in ways that will be more conducive to the culture of love for Him. … Srila Prabhupada did make some concessions in introducing Krishna consciousness to people in western countries. Regarding vegetarianism, he was careful to make sure the diet was rich and delicious by any standard so that his followers would feel no compunction to return to a carnivorous diet.

Men, that is why in Argentina they eat so much meat. I have worked in the Buenos Aires Real Estate business and I have never seen a place like this. I mean, you can eat a steak whatever you wont.