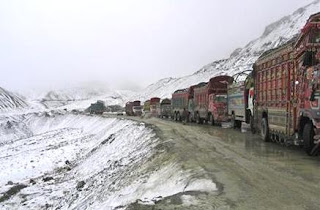 AFGHANISTAN (Reuters) - Heavy winds and rain set off 17 avalanches that buried more than two miles of highway at a high-altitude pass in the Hindu Kush mountain range, entombing hundreds of cars and cutting off Kabul’s heavily traveled link to northern Afghanistan, officials said Tuesday. Local officials said days of heavy snow led to avalanches that buried part of the mountain pass that connects Kabul to the northern city Mazar-i-Sharif. A series of massive avalanches have killed at least 165 people on Afghanistan’s busiest highway, officials said yesterday, as rescuers struggled to free more than 1,500 people trapped deep inside the Hindu Kush. Hundreds of cars, buses and lorries were jammed bumper to bumper in the path of the advancing snow, witnesses told The Times, after bad weather brought the two-mile pass to a halt before the avalanches struck. Dozens of cars were swept off a treacherous mountain pass on Monday when snowfalls caused more than three hours of avalanches near the Salang tunnel. Rescuers have already recovered 165 bodies from the Salang Pass and 135 have been injured. The calamity began Monday at the southern approaches of the 12,000-foot-high Salang Pass, just south of a tunnel through the mountains, which connects Kabul with northern Afghanistan. Officials said that snow buried more than two miles of road.

The interior minister, Mohammad Hanif Atmar, said a storm with heavy wind and rain blew in suddenly during the afternoon, setting off a series of avalanches above the highway, which is cut into mountainsides and often runs high above a river gorge. Nearly a mile of the highway remained buried as of Tuesday evening.

Email ThisBlogThis!Share to TwitterShare to FacebookShare to Pinterest
Etiquetas: Accidents