PHILOSOPHER BERNARD HENRI-LÉVY
CAUGHT OUT BY A LITERARY PRANK 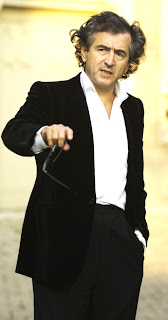 PARIS (AP) - The celebrity French philosopher Bernard Henri-Lévy—he of the unbuttoned white shirts and coiffed hair—has backed up the arguments in his latest book, "On War in Philosophy", by citing the work of a fake philosopher. In arguing that Imanuel Kant was a madman, Henri-Lévy quoted from the lectures of Jean-Baptiste Botul—the creation of the journalist Frédéric Pagès. Botul has a rabid following—which recognizes that he’s not real—and debates his metaphysics of flab and his ideas on cheese, sausages, women’s breasts, and the transport of valises in the 1930s. In "De la Guerre en Philosophie", Levy cited a quotation from a book ostensibly written by Jean-Baptiste Botul, a fictional creation of journalist Frederic Pages. The gaffe, which was revealed by the Web site of Le Nouvel Observateur newsweekly this week, sparked a storm of Internet posts poking fun at Levy, France's superstar intellectual par excellence. Lévy quotes the fine insights of a French writer named Jean-Baptise Botul on the 18th-century German philosopher Immanuel Kant. But Botul, it turns out, is not a real person — he's a fictional character created five years ago by Frédéric Pagès, a journalist at the French satirical weekly Le Canard Enchaîné. Using Botul as a pseudonym, Pagès published a verbose book on Kant in 1999, which was intended to be a playful dig at French intellectuals.

Levy himself acknowledged his mistake, owning up to the error with lighthearted grace. "I learned today through the Internet ... it was a hoax," he told Canal Plus television on Monday. Levy congratulated Pages, saying he had long found his 1999 book "La Vie Sexuelle d'Emmanuel Kant" (The Sexual Life of Emmanuel Kant) — penned under the pseudonym Botul — "marvelous." "Vive Frederic Botul, vive Frederic Pages," Levy concluded, mixing up the names of the journalist and his creation. Levy, with his trademark wind-swept hairstyle, perma-tan and starched white shirt left largely unbuttoned, is an instantly recognizable public figure. He is known as much for his jet-setting lifestyle as for his work.

Almost everyone, including scientists, religionists and philosophers, are engaged in a noble search for truth. Yet, what is truth and how do we find it? ... Let us ask the question, “What is real knowledge?” The most generally accepted method of receiving knowledge is by direct perception, pratyaksa. Although often used in scientific quests, this method is subject to the four defects from which all mankind suffers: bhrama, pramāda, karanāpātava and vipralipsā. That is, all humans are subject to illusion, have imperfect senses, make mistakes and have a tendency to cheat.