Ubung Kaja, Bali (VIVAnews) - Bali is so unique that its tradition, customs and culture blend in the daily lives of the Balinese. Although everything is rooted in Hinduism, multiculturalism is applied as a glue to the diverse culture.  From the philosophy expressed in its architecture to its ornamentation and even a purification ceremony, a Catholic church of Ubung Kaja in Denpasur has adopted the appearance of Hinduism.  Jesus the Good Shepherd Church witnesses the great diversity Bali offers and it is full of Balinese ornaments.  Father Servasius I Nyoman Subhaga SVD explained that the “Jesus the Good Shepard” church building was designed in accordance with Asta Kosala Kosali (Hindu philosophy) and Tri Mandala (three Balinese concepts on Balinese building layout).  The entire church building, whose construction was initiated in 2003, is perfectly typical of Balinese model.

The layout and exterior of the church adopts Balinese culture, and the church is full of Balinese ornaments.  In fact, the church keeps a kulkul (wooden alarm), a device usually installed in temples and hamlets in Bali.  In further mimicry of Hinduism, this church held Melaspas, a Balinese Hindu purification ceremony led by Hindu religious leaders before a new building is occupied.  Bali’s governor, Made Mangku Pastika, asserts that the church can inculcate virtue in the people. “This church is a magnificent place to educate people,” he said.  Chief of Uma Sari Hamlet in Ubung Kaja, I Ketut Matulisi, said his people have high religious tolerance. “People here are tolerant. Every time the church holds a ceremony, our people are entrusted to be on guard,” he said.

“Jesus the Good Shepherd Church” in Ubung Kaja, Denpasar, is full of Balinese ornaments, and it is said the decoration was chosen to respect the local culture.  However, it is thought this is part of the Catholic Church’s “Inculturation” program, widely used in India and in other areas where conversion is not easy to come by.  It consists of adopting a facade of the local religion and then moving the followers gradually away from it.  It sometimes backfires and Catholicism becomes a permanent religious mix for that area.  At other times, it succeeds in undermining the local Hindu faith. 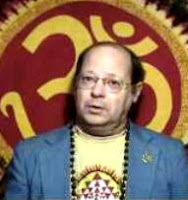 Conversion tears the individual away from his or her family, and from the rest of the community. Acts of conversion, therefore, create social unrest and clashes in an area that has until recently been a place of community peace and cooperation. What is now appearing is the typical form of competition found in western society, and a class struggle emerging in the once classless society. In this way, we can understand that the work of religious conversion in the guise of social service by calling the indigenous cultures and the forefathers as satanic or worshipers of Satan, or people of darkness and damned to hell, is a form of violence of the worst sort. ... The idea is given that unless the people become Christian, they will not become qualified to develop themselves like America has done. They are told that becoming Christian is the way to become more materially successful.
Stephen Knapp (Śrīpad Nandanandana dasa) :
“Preaching in India’s Northeast for Cultural Preservation”
http://www.stephen-knapp.com/preaching_in_indias_northeast_for_cultural_preservation.htm
http://www.stephen-knapp.com  -  http://www.stephenknapp.info/
Publicado por dasavatara das en 1:38 PM