‘MANY AMERICANS’ UNCOMFORTABLE WITH MUSLIMS

POLL: AMERICANS ARE TOLERANT
OF OTHER FAITHS - EXCEPT ISLAM

Washington D.C. (RNS) - Americans consider religious freedom a cornerstone of society, but fall short in their tolerance of Muslims, according to a poll released Tuesday (Sept. 6) that probes Americans’ attitudes toward immigrants and the nation’s safety 10 years after 9/11.  The “What It Means to Be American” poll found that a small majority (53 percent) say the country is safer now than before the 9/11 attacks.  Attitudes toward Muslims, however, are far less straightforward.  More than 8 in 10 Americans say that self-proclaimed Christians who commit violence in the name of Christianity are not really Christians. By contrast, less than half (48 percent) say that self-proclaimed Muslims who commit acts of violence in the name of Islam are not really Muslims.

“Interestingly, we find that Americans basically have a double standard when it comes to evaluating religious violence,” said Robert P. Jones of the Public Religion Research Institute, which produced the survey with the Brookings Institution.  Muslims are now testing the nation’s tolerance, particularly as they try to build mosques, Brookings scholar William A. Galston said.  “The sitting of Muslim houses of worship has become the object of great controversy, which really goes right at the heart of religious free exercise,” he said.  The biggest differences in perceptions about discrimination emerged between those who most trust Fox News and those who most trust public television, with nearly seven in 10 Fox News fans saying that so-called reverse discrimination is as big a problem as traditional discrimination, compared to less than one in four public television viewers.

A survey of 2,450 adults paints Americans’ attitudes toward Muslims as a complex picture of acceptance and wariness.  Nearly 9 in 10 Americans agree that “America was founded on the idea of religious freedom for everyone, including religious groups that are unpopular.”  95 % of Americans believe all religious books should be treated with respect, no matter the religion.  Only 16 % of Americans believe that people in Muslim countries have a favourable view of the United States. We should not promote Islamophobia, because hate speech incites more violence. 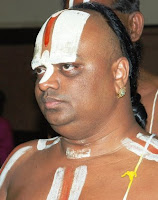 A new fear by name Islamaphobia is spreading in all corners of the world, not only terrifying non Muslims but also Muslims. ... In 2006, an Islam network by name "Al Jazeera" conducted an opinion poll among muslims, regarding Osama Bin Laden's twin tower attacks. 49% were in favour of Bin Laden justifying the attacks.  In US, there is an ongoing dispute between the state and muslim charities. Authorities believe that anti-social networks are supported in the pretext of donations and now Muslims are agitating that their fundamental as well as religious rights are seized.  Muslims with latent fervour, change their moderate attitude at the time of religious sensations. ... Islam needs to develop more interfaith forces to compete with its fundamental elements and we see lot of young and energetic moderates, functioning amidst threat and peril.
Śrīla S.A.R. Prasanna Venkatachariar Chaturvedi Swamy :
Acarya of Ramanuja Sampradaya
“International Conference on Interfaith”
“Culture, Philosophy, Literature and Religion”
7th and 8th Sep 2009 at Somaiya Auditorium, Mumbai, India.
http://saranagathi.org/blogs/members/chaturvedi
http://www.sriramanujamissiontrust.org
Publicado por dasavatara das en 9:51 PM