WITH CLASHES AND RIOTS, THOUSANDS
DEMAND EDUCATION REFORM IN CHILE

http://news.sky.com - Student protests in Chile have turned violent again as tens of thousands took to the streets demanding changes to public education.  Masked demonstrators burned cars, looted storefronts and threw furniture at police in the capital Santiago and other cities.  Apartment buildings were also attacked as riot police used tear gas and water cannon to push back students.  Police have said 23 officers were injured during the protest which saw 273 demonstrators detained.  Students have been demanding a fundamental change to how Chile finances public education.  They also called for private universities enjoying a non-profit tax status to reinvest revenues into educational improvements, as is required by law.  University of Chile student president Camila Vallejos claimed that 150,000 marched on Santiago’s side streets because they were denied permission by the government to protest on the main avenue.

Deputy interior minister Rodrigo Ibilla doubted these figures, estimating that 70,000 to 80,000 had protested in the capital.  The demonstration had started out peacefully with many students wearing costumes, dancing, singing and waving signs.  However, a group of masked protesters split off from the main parade and attempted to break through police barricades blocking the way to the presidential palace.  A protest five days earlier, which had been deemed illegal, ended with 900 arrests and many civilians and police officers injured.  Teachers’ union president Jaime Gajardo reiterated the students’ call for a national referendum on their demands.  The leaders of the governing centre-right coalition have dismissed this as unconstitutional and dangerous.

Tens of thousands of teachers, students, parents and sympathetic labor activists marched in downtown Santiago, Chile, for the fifth time in two months to demand reforms from the conservative government.  Apart from a rising anger over poverty, the top of the list of demands is education, which is the privilege of the few.  Some protesters started fires and threw rocks at police, who responded with tear gas and water cannon.  When there are different centers of interests, nobody can avoid clashing of groups, so Nama-Sankirtan is a universal remedy which can unite all people's hearts. 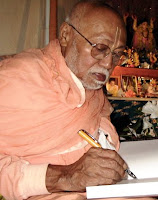 According to Lord Sri Chaitanya Mahaprabhu, Transcendental Divine Love is the strongest spiritual force on earth which can establish close relation of love and unity of hearts amongst all human beings and thereby establish real peace in the world. There is an outbreak of conflagration of group clashes throughout the world. Nowhere you will find peace. ... False egos create false interests and by that clashing of interests we see the forest fire in this world. ... In the present age, “Nama-Sankirtan” is the best medicine and effective way to achieve the summum bonum of human life as it can be performed under any sort of circumstances.  Sri Chaitanya Gaudiya Math institution is engaged in the propagation of the all-embracing doctrine of Transcendental Divine Love of Lord Sri Chaitanya Mahaprabhu to counter the present trend of violence and cruelty and to bring unity of hearts amongst all irrespective of caste, creed and religion.
Śrīla Bhakti Ballabh Tirtha Mahārāja :
“Strongest Spiritual Force on Earth”
Press conference, on 29 December, 2000, Mumbai.
Sree Chaitanya Gaudiya Math - www.sreecgmath.org
http://dir.groups.yahoo.com/group/sreecgmath/message/64
Publicado por dasavatara das en 10:53 AM