JANMASHTAMI: A DAY SOAKED IN
DEVOTION, RITUALS AND CELEBRATIONS

http://www.hindustantimes.com - While hundreds of Govinda groups will build pyramids and break dahi handis on Monday, families celebrated Janmashtami, the occasion of Lord Krishna’s birth, with their own festive rituals at homes and in temples at midnight on Sunday.  Sri Krishna Janmashtami, also known as Sri Krishna Jayanti, Gokulashtami and Krishnashtami, marks the birthday of Lord Krishna.  Krishna’s arrival in the world is celebrated as with enthusiasm and fervour by his devotees.  In Ghatkopar, the six-member Shah family had hidden an idol of Baal Gopal (baby Krishna), which they brought out at midnight, bathed in milk and honey, and dressed in new clothes.  “In keeping with tradition, each of us rocked the cradle in which baby Krishna was kept,” said Khushali Shah, 24, a freelance interior designer. “My nephews also enacted the scene of the Lord’s childhood attempts to steal butter and curd from earthen pots.”

Nita Kotak, 40, prepared for Janmashtami for a week. “We made prasad from coriander seeds, sugar and dry coconut, to give to our neighbours and friends at the temple at midnight,” said Kotak who recited hymns on Krishna at her local Panvel temple on Sunday night, and will observe a fast on Monday. “The fast is traditionally observed to mark the Lord’s birth.”
Prime Minister Manmohan Singh said the festival celebrates teachings of Lord Krishna - discipline, knowledge and selfless action - which are timeless.  “May the festival inspire us towards a work ethic based on right conduct and bring success and prosperity to all,” he said.
Vice President Hamid Ansari greeted the people on Janmashtami and hoped that the auspicious occasion brought amity, harmony, prosperity and happiness in the people’s lives.  “I extend my heartiest greetings and good wishes to the people of our country on the auspicious occasion of Janmashtami”, he said in a message.

With elaborately decorated cradles to mark the birth of Lord Krishna, Janmashtami celebrations began in all India with much gaiety.  The birth of Krishna is celebrated with gusto in many Hindu households.  But temples have their own special rituals for the day.  There is joy and celebrations amongst the devotees of Lord Krishna, for whom no effort seems enough when it comes to serving the Lord.  The Supreme Personality of Godhead, Krishna, Hari in His original form, appeared as Visnu so that His father and mother could understand that their son was the Supreme Personality of Godhead. 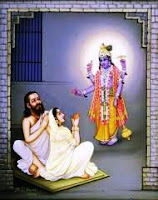 Thereafter, at the auspicious time for the appearance of the Lord, the entire universe was surcharged with all the qualities of goodness, beauty and peace. The constellation Rohinī appeared, as did stars like Aśvinī. The sun, the moon and the other stars and planets were very peaceful. All directions appeared extremely pleasing, and the beautiful stars twinkled in the cloudless sky. Decorated with towns, villages, mines and pasturing grounds, the earth seemed all-auspicious. ... Vasudeva then saw the newborn child, who had very wonderful lotuslike eyes and who bore in His four hands the four weapons śańkha, cakra, gadā and padma. On His chest was the mark of Śrīvatsa and on His neck the brilliant Kaustubha gem. Dressed in yellow, His body blackish like a dense cloud, His scattered hair fully grown, and His helmet and earrings sparkling uncommonly with the valuable gem Vaidūrya, the child, decorated with a brilliant belt, armlets, bangles and other ornaments, appeared very wonderful.
Śrīla A. C. Bhaktivedanta Swami Prabhupāda :
Śrīmad Bhāgavatam - Canto 10: “The Summum Bonum”
Chapter 3: “The Birth of Lord Krishna”
Verses 1-2, 9-10 - Bhaktivedanta VedaBase
Publicado por dasavatara das en 8:14 AM