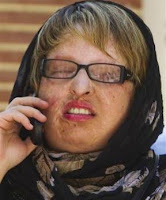 http://www.rferl.org - An Iranian woman who was blinded and badly disfigured in an acid attack has stopped a retributive blinding sentence from being carried out on her attacker at the last moment.  “He was standing in the hospital operating room and the doctor was about to put acid in his eyes. It was that moment when I said, ‘No, I don’t want this,’” said Ameneh Bahrami.  The sentence of “retribution in kind” called for five drops of sulfuric acid to be put in each of Majid Movahedi’s eyes for the 2004 incident, when the spurned suitor poured a bucket of acid on Bahrami, ultimately leaving her blind and forcing her to undergo at least 17 operations.  But as the acid was about to be applied by a doctor in a live broadcast on Iranian state television, Bahrami forgave her attacker and spared him the punishment.  “The Koran gives you the right to retribution,” Bahrami says.  “But this very Koran also encourages you to pardon, since pardoning is one of the highest moral standards.” 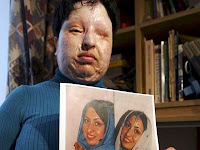 Movahedi said Bahrami was “very generous,” but she said her attacker “hasn’t changed one bit.  This person is still dangerous for society. I think a person like Majid Movahedi should be kept in prison until the last moment of his life.”  Despite the protests raised against the cruel and inhumane nature of the retributive punishment by Iranian and international rights groups, Bahrami had insisted on it being carried out. Even after sparing Movahedi, she said she had no regrets in doing so. “Other victims after me might decide for the sentence of retribution to be carried out on their attackers, some might drop it,” she said. Bahrami also said she still wanted financial compensation from Movahedi’s family. “I was told that since you’re a woman, you’re entitled to half of the total amount of 200 million tomans [almost $200,000], which is 100 million tomans.  I am a full person and I am entitled to full amount of the blood money,” she said.

An Iranian woman Ameneh Bahrami who is victim of acid attack, pardoned a man named Majid Movahedi who was convicted of throwing acid in her face. Movahedi was sentenced for ‘qesas’ (‘eye for an eye’-style justice) to be blinded in both eyes after being charged with hurling acid in the face of the Bahrami when she repeatedly rejected his suggestions for marriage. She said she forgave the attacker man, “because God talks about ‘qesas’ (retribution) in the Koran but he also recommends pardon; since pardon is greater than qesas and I wanted to do a greater job.”  Justice is human, mercy and forgiveness are divine.

Yes, you are right, and it is also a great lesson about forgiveness. Thank you for your comment.