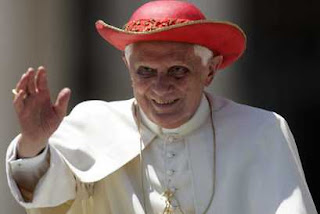 PRAGUE - Pope Benedict XVI recalled the evils of the communist era Saturday as he began a three-day pilgrimage to the Czech Republic, and he urged the fiercely secular nation to rediscover its Christian roots. At a welcome ceremony at Prague's Ruzyne International Airport, the 82-year-old pope spoke of how the communist regime overthrown in 1989 ruthlessly persecuted the Roman Catholic Church. "I join you and your neighbors in giving thanks for your liberation from these oppressive regimes," Benedict said, hailing the collapse of the Berlin Wall two decades ago this autumn as "a watershed in world history." "Nevertheless, the cost of 40 years of political repression is not to be underestimated," the pope said. Under communism, the church was brutally repressed.

"A particular tragedy for this land was the ruthless attempt by the government of that time to silence the voice of the church. Now that religious freedom has been restored, I call upon all the citizens of this republic to rediscover the Christian traditions which have shaped their culture," The Pope added. However most Czechs seemed his visit as irrelevant - and some were openly hostile. "It's just a waste of money, at a time of economic crisis, when our salaries are going down, the visit is a useless investment.", said a woman. In the Czech Republic, "the practice of religion is reduced to a minority, Czechs are getting less religious every year, they are more interested in horoscopes or other kinds of magical predictions," said the pope's spokesman.

Consciousness or matter? A fossil or God? Before the First World War, I was a student of law in the university. In my senior year I studied philosophy under a professor named Mr. Stevenson. He gave four ARGUMENTS AGAINST ATHEISM, one of which I find very useful: "CONSCIOUSNESS IS THE STARTING POINT OF EVERYTHING." Whatever you say presupposes consciousness. Any statement presupposes consciousness. ... This is Berkeley's theory. Everything is an idea in the ocean of consciousness. ... This point can never be refuted.
Srila Bhakti Raksak Sridhara Maharaja:
"Subjective Evolution of Consciousness - Chapter Five: A Floating World of Experience"
Publicado por dasavatara das en 8:48 AM