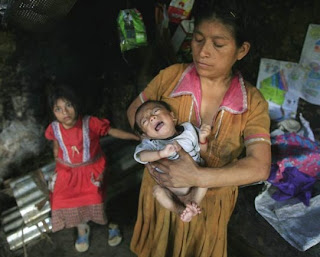 Guatemala City (CNN) - Guatemalan President Alvaro Colom has declared a "state of national calamity" because so many citizens do not have food or proper nutrition. Colom said his declaration will make it easier to get food to the thousands of Guatemalan families who are in dire need. The United Nations' World Food Programme says Guatemala has the fourth highest rate of chronic malnutrition in the world and the highest in Latin America and the Caribbean. Chronic undernutrition affects about half of the nation's children under the age of 5, the U.N. agency said. Colom said the nation's food problems are the result of a drought this year, global warming and the effects of the international economic crisis.

According to the World Bank, about 75 percent of Guatemalans live below the poverty level, which is defined as an income that is not sufficient to purchase a basic basket of goods and basic services. Almost 58 percent of the population have incomes below the extreme poverty line, which is defined as the amount needed to purchase a basic basket of food. This is the cause of the food and nutritional crisis that this country is going through," Colom said. "There is food. What we don't have are the financial means so that those who are affected can buy the available food. Let's not wait until we have a famine to act." Poverty is more pronounced among indigenous populations and those who live in rural areas. In the nation's highlands, where many indigenous people live, seven of 10 children under age 5 are malnourished, the World Food Programme says.

WHAT DO THE VEDIC TEACHINGS TELL US?
The modern theory that starvation is due to an increase in population is not accepted by the demigods or the devotees of the Lord. The devotees or demigods are fully aware that the Lord can maintain any number of living entities, provided they are conscious of how to eat. If they want to eat like ordinary animals, who have no God consciousness, then they must live in starvation, poverty and want, like the jungle animals in the forest ... but it is the duty of human beings to acknowledge the mercy of the Lord. As a matter of gratitude, they should feel obliged to the Lord for their supply of foodstuff, and they must first offer Him food in sacrifice and then partake of the remnants.