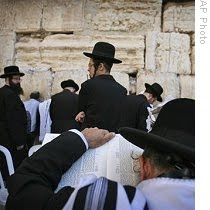 Jerusalem (AP) - While most of the capital enjoyed a calm and quiet Yom Kippur, disturbances continued to flare up across east Jerusalem throughout the holiday, beginning on Sunday morning, when some eighteen policemen and 15 rioters were wounded during riots on the Temple Mount and later in the alleyways of the Old City's Arab Quarter. Police said some 150 Muslim worshipers participated in the disturbance on the Temple Mount, which began when a group of Jewish visitors entered the compound with a police escort. Rioters hurled rocks at the visitors and policemen, lightly wounding two officers, and police responded with stun grenades while the visitors were escorted away. The riots died down, but the Temple Mount was subsequently closed off to visitors.

Yom Kippur prayers at the Western Wall later in the day were not affected by the riots. Residents criticized the conduct of the police officers. "Jerusalem police should deal with the Arab rioters and not violate the freedom of Jewish worshippers who want to pray," he said. A curfew was imposed midnight Saturday in Judea and Samaria, and will be lifted at midnight after the end of Yom Kippur, the Day of Atonement. During that period, Palestinian Authority Arabs will only be allowed to cross the pre-1967 border into areas solely controlled by Israel for unusual medical and humanitarian reasons. Each individual case will require the approval of the Civil Administration.

The Srimad Bhagavatam is the essence of all the Veda and Vedanta. There, Krsna tells Uddhava: 'In the course of time, the Vedic message was lost in the great flood of universal destruction. Then I once again spoke this religious knowledge about myself to Brahma, who told it to his oldest son Manu. Then Bhrgu and the seven great sages received it from him.' (SB 11.14.3-4). This topmost religion related to the Lord himself has been kept intact to the present day through the institution of disciplic succession, the holy chain of the sampradaya. Outside of the sampradaya, it is difficult if not impossible to come into contact with these pure teachings.
Srila Bhakti Promode Puri Maharaja :
"Sampradaya - Pranali"
Publicado por dasavatara das en 5:15 PM