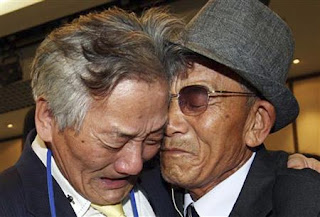 SEOUL (Xinhua) - A group of 431 South Koreans are expected to meet their long-lost relatives in the Democratic People's Republic of Korea (DPRK) on Tuesday at Mount Kumgang resort during the second segment of ongoing family reunions. The first two-hour reunion session will be held in the afternoon. Then, the South Korean government will host a banquet for the families. The three-day event, arranged by the Red Cross offices of both sides, will also include four more reunion sessions. Most of the hundreds of thousands of South Koreans looking for lost family members in the North are 70 or older, meaning time is running out.

Most of the participants were in their 70s to 90s. The oldest one is Kim Yu-jung, 100 years old, who will meet her 75-year-old daughter in the DPRK, Yonhap news agency reported. The reunion program of families separated by the 1950-53 Korean War began in 2000 after a historic inter- Korean summit between the two sides. About 600,000 South Koreans are believed to have relatives in the DPRK. Ordinary citizens were not allowed to make phone calls, send letters or exchange e-mails. Thousands of South Koreans who applied to take part in reunions when the chance was first offered about a decade ago have died before their wish could be granted. The last reunions were held in October 2007. The program was suspended as ties between Pyongyang and Seoul soured after South Korea's conservative government under President Lee Myung-bak came to power in February 2008.

The inhabitants of Vrindāvana were well-wishers and intimate friends of the Yadu dynasty. ... Meeting after long separation, they were all jubilant; their hearts throbbed, and their faces appeared like freshly bloomed lotus flowers. Drops of tears fell from their eyes, the hair on their bodies stood on end, and because of their extreme ecstasy, they were temporarily speechless. In other words, they dove into the ocean of happiness. ... In this meeting at Kurukshetra, Kuntīdevī and Vasudeva, who were sister and brother, met after a long separation, along with their respective sons and daughters-in-law, children and other family members. By talking among themselves, they soon forgot all their past miseries.