ENVOY'S MIDEAST TRIP ENDS WITHOUT ACCORD 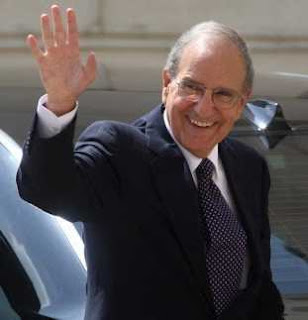 JERUSALEM. - White House special envoy George J. Mitchell finished a week of diplomacy in the region without reaching an agreement with Israel over limits on Jewish settlement in the occupied West Bank, diminishing chances for a breakthrough meeting between Israeli and Palestinian leaders next week at the U.N. General Assembly session. Mitchell met with Israeli Prime Minister Binyamin Netanyahu three times this week, including two sessions on Friday; visited Palestinian Authority President Mahmoud Abbas twice in the West Bank city of Ramallah; and made side trips to Egypt and Jordan. But the intense round of diplomacy failed to broker even a handshake between Netanyahu and Abbas at the U.N. meeting next week, signaling a deepened stalemate over an issue that President Obama has set as one of his top priorities.

The Obama administration had hoped to announce at next week's gathering the renewal of Israeli-Palestinian peace negotiations. But Mitchell's months of arbitration failed to coax an agreement from Israel to impose a settlement freeze or persuade Abbas to restart talks without one. Israel has said it would suspend construction for several months, but it also excluded from those limits thousands of homes already under construction, approved building permits for an additional 455 projects and exempted disputed areas of East Jerusalem altogether.