www.mapuexpress.net - Valentina Vives Granella, the spokeswoman from American Free Seed Network (RSL) in Chile, now lives around Valdivianos environments, based on Rebellin. Moving into the region of Araucanía, Los Ríos and Los Lagos, she works hard in shaping collaborative human networks around permaculture, self-sufficiency, and good living, with particular focus on the seeds, the basis of life.
The school house that she is leading has the purpose to promote sustainable local development and its many aspects, by connecting and linking to community practice. Valentina studied chemistry and environmental biology at the University of Chile but now she serves as an activist in defense of biodiversity and indigenous peoples. Mainly through collaborative networking, education and information campaigns. 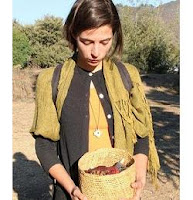 Chile Free Seed Network was organized due to the fact that the original seeds, and the old cultural tradition (ancient wisdom) associated with the native cultivation, feeding, gastronomy, medicine, textiles, celebrations, rituals, ceremonies, storing and planting techniques, are now threatened, and at risk of disappearing, by the modern industrial food system.
Valentina explains that one of the greatest threats are the laws that allow companies to have intellectual property rights on seeds, genetic manipulation, monocultures, border barriers, among many others threats which include the growing disconnection of humans with the Earth and the lack of observation and respect towards nature's own cycles. These laws and this multinational model allow land erosion, genetic manipulation, cultural destruction and the lost of identity, with the result that feeding is monopolized.

Valentina Vives Granella, from American Free Seed Network Chile, explains that “by controlling seeds, people is controlled. This movement, which puts the seed at the center and at the base of their actions, is a movement whose main objective is the liberation of human beings and good living.” The RSL Chile was formed in 2012 with people from different disciplines and occupations as activists and enthusiasts of LIFE seeds. “We work to rescue and promote the cultural identity of peoples, and also to the seed which is source of life and creativity,” Valentina says.  We have to defend our freedom; therefore, we have to save mother Earth's seeds. 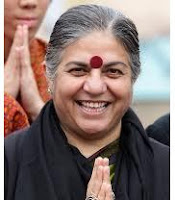 There is a global emergency because seeds have been appropriated and colonized. Corporations have declared that seeds are their intellectual property, and the only way that they can get the intellectual property is by modifying and mutilating by genetic engineering. So we have a double hazard - the hazard of genetic engineering and the hazard of seed patenting. We have seen what this combination does in the area of cotton. India is the land of cotton ... but today the seed is under threat, because all the cotton we can spin now is genetically engineered Bt cotton, under the control of one company, Monsanto. That’s why, if we don’t save seeds, all the diversity will be gone forever, and with it the memory that is in the seed - the ecological memory and the cultural memory. And with it will go the livelihood of farmers. It devastates Nature.