A SERIAL KILLER IN NAZI-OCCUPIED PARIS 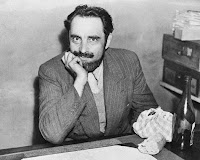 (Reuters) - Nazi-occupied Paris was a terrible place to be in the waning days of World War II, with Jews, Resistance fighters and ordinary citizens all hoping to escape. Disappearances became so common they often weren’t followed up.  And one man used the lawlessness for his own terrible purposes, killing perhaps as many as 150 people.  Yet it wasn’t until thick black smoke seeped into buildings in a fashionable part of the city that fire-fighters and police were called to an elegant townhouse where they found body parts scattered around - setting off a manhunt that led them, eventually, to Marcel Petiot.  The crime was very much of its time, said former history professor David King, who chronicled the hunt for Petiot in ‘Death in the City of Light.’  “Paris was not a good place to be. A lot of people were trying to leave Paris, a lot of people just disappearing. He had it plotted out, a very devious plan,” said King. 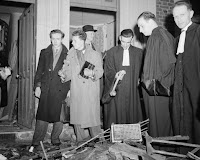 “Here’s a guy - Marcel Petiot, who was accused of all the murders. Obviously very intelligent, charismatic, has a respected position, is into collecting antiques, interested in the arts.  And yet, you get to the other side, when he’s accused of some of the most disturbing things you can think of: savagely dismembering bodies,” King said.  Through years of research, including perusal of Parisian police archives closed since the crimes took place, King pieced together the story of how Petiot claimed to be a member of the resistance and lured many of his victims in by promising them safe passage to South America in return for payment. Once in Petiot’s hands, the victims were told to write letters to their relatives, telling them that they were fine and would return once times had settled down. Then they were killed, most likely by lethal gas, and dismembered or burned.  This serial killer was convicted of 26 murders and guillotined as punishment for his crimes.

In 1947, Dr. Marcel Petiot was a respected physician who turned serial killer by night.  He was accused of murdering "only" some 27, but authorities suspected his real toll was far higher.  Petiot regularly treated refugees, businessmen and Gestapo agents, but also had a predilection for killing wealthy Jews desperate to leave Paris by luring them in with promises of escape and burning their bodies in a basement furnace.  Conditioned souls enter this mundane world and after leave it, are rewarded or punished for the good and bad actions commited here. 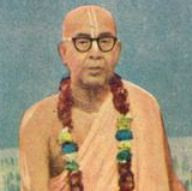 The soul is neither born nor does it die. The soul has everlasting existence. It is exempt from liability to extinction. ... The soul is rewarded or punished for all the deeds committed in a former life. ... The soul may soar so high as to become a divine being fully conscious of his own true nature as an eternal servant of the Supreme Lord in the spiritual kingdom, or it may descend so low as to appear no better than sticks and stones.  The destiny of each individual soul is thus made or marred by himself. As spiritual beings, all individual souls possess the faculty of free will divinely bestowed upon them. They can abuse this gift of God or they can make the best use of it. The Supreme Lord does not interfere with His gift, viz., the soul’s freedom of choice.
Śrīla Bhakti Saranga Maharaj
“Gaudiya Vaishnava Theologhy”
Bhaktivedanta Memorial Library - www.bvml.org/SBSGM/
Publicado por dasavatara das en 10:07 AM

Hmmm, why would any doctor kill so many people for nothing?? She should be in a mental asylum as everyone thinks so!!!