FICKLE OIL SLICK SCATTERS ITS
THREATS ACROSS GULF OF MEXICO 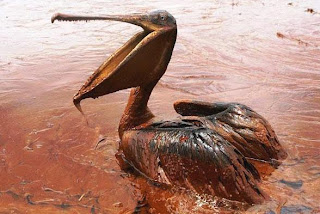 HOUSTON (Xinhua) - British energy giant BP PLC says it has so far spent about 1.43 billion dollars containing the Gulf of Mexico oil spill, the worst environmental disaster in American history, as the company continues to deal with the nightmare in markets and public relations. A containment cap on the damaged oil well is collecting almost 15,000 barrels, or 630,000 gallons, of oil a day, up sharply from previous amounts. In the past five days, the company has kept about 57,000 barrels from leaking into the Gulf. Experts have estimated the leak spews 12,000 to 19,000 barrels a day, with one estimate as high as 25,000. Meanwhile, the White House is facing public discontent as many Americans are unhappy with President Barack Obama's handling of the spill. Gulf coast residents have complained that the federal government has been slow to act and too dependent on BP for solutions. Scientists said the oil - brick red in places, chocolate brown in others - could spread as the hurricane season begins. The crude could travel wherever a storm surge takes it - even to New Orleans, for example.

Officials reported that a containment cap over the BP gusher at the bottom of the Gulf was sucking up one-third to three-quarters of the oil - but also noted that its effects could linger for years. And as the oil patches flirt with the coastline, slathering some spots and leaving others alone, residents who depend on tourism and fishing are wondering in the here and now how to head off the damage or salvage a season that's nearing its peak. One-third of the Gulf's federal waters are closed to fishing and the toll of dead and injured birds and animals is climbing. Little seems amiss in Mississippi except a shortage of tourists, but an oily sheen glides atop the sea west of Tampa. The oil spill plaguing the states along the Gulf of Mexico isn't one slick - it's many.

While BP executives are still blaming each other for the disaster, the black gold of the men is still killing fish and everything in its way through the sea. For years we celebrate the worldwide environmental day, earth day, water day, climate day, etc., yet mankind continues to commit environmental disasters, which can not be solved with Dollars or in Euros.

Materialism and consumerism lead to greed, selfishness and exploitative mentality, which comprise pollution of the heart. These ideologies pervert the pure human desire to find immortal joy in loving and serving God into the polluted desire to seek flickering pleasure by exploiting nature. This pollution of the heart impels people to knowingly persist with activities that pollute the environment. For example, due to greed, industrialists avoid treating toxic effluents before releasing them into rivers. Therefore only when people learn to find happiness within and not without can we hope to avoid ecological apocalypse. The easiest and the most effective way of finding inner joy is chanting the Holy Names of God.