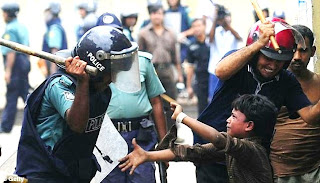 www.guardian.co.uk - Police in Bangladesh using bamboo staves, teargas and water cannon fought with textile workers demanding back pay and an immediate rise in monthly wages on the streets of Dhaka today. Witnesses said at least 30 people, mainly workers producing garments for global brands, were injured. Pictures showed children apparently being beaten. Ten policemen were also hurt. Although there has been violence for several weeks, today saw workers erecting barricades, pelting police with stones and attacking cars. Police described the fighting as the worst yet seen. Children under the age of 14 are banned by law from working, but campaigners say many can still be found in the sprawling factories. Hundreds of teenagers took part in running battles with police today. Many of the rioting workers are employed by plants which make ready-to-wear garments for sale in western high street stores. 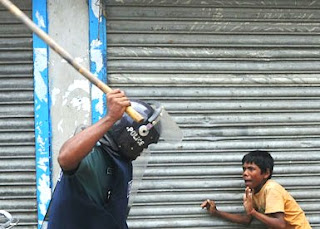 An estimated three million workers, mostly women, are employed in the Bangladeshi garments industry. The lower paid workers earn a minimum monthly salary of 1,660 taka, equivalent to less than £18. They have demanded an increase to 5,000 taka. Low levels of unionisation and organisation have meant protests that are chaotic but difficult for the police to predict or break up. Raids by protesters on well-known factories are frequent occurrences. Owners have hired their own gangs to protect their production lines. Dozens of people were hurt in several days of unrest last week in the Ashulia industrial zone, 20 miles outside Dhaka, where nearly 300 textile factories were closed temporarily. Workers said that their employers had imposed lock-outs in an attempt to break their strike. The Garment Manufacturers and Exporters Association expressed that the violent protests have created "panic and anarchy". Factory owners argue that the unrest risks frightening away western clients who need reliable deliveries.

A global report from the International Trade Union Confederation in Vienna said Bangladeshi garment workers were the "world's most poorly paid" and that their exploitation was "on the rise". Factory owners do not pay overtime and take advantage of the workers who go through much suffering without any hope of changing their way of life.

At the present moment human society is overly influenced by the mode of passion, and consequently people are engaged in working in big factories. They forget how distressful it is to live in such places. In Bhagavad-gītā such activities are described as ugra-karma, that is, distressful activities. Those who utilize the energies of the worker are called capitalists, and those who actually perform the work are called laborers. In actuality they are both capitalists, and the workers are in the modes of passion and ignorance. The result is that there is always a distressful situation. In contrast to these men are those influenced by the mode of goodness - the karmīs and jñānīs. ... In this way all classes of living entities in various species of life are existing within this material world.