EVERY HOUR A CHILD IS BORN
IN CHINA INFECTED WITH SYPHILIS 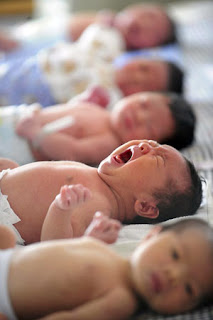 LONDON (ANI) - Almost wiped out 50 years ago, the easily curable bacterial disease has re-emerged in its largest city, Shanghai. Every hour a baby is born in China with syphilis, as the world's fastest-growing epidemic of the disease is fueled by men with new money from the nation's booming economy, researchers say in an article published in the New England Journal of Medicine. Prostitutes along with gay and bisexual men, many of who are married with families, are worsening the epidemic. This increase is mirrored in the country's fast economic growth, causing both - businessmen and migrant labourers more cash and opportunity to pay for unsafe sex while away from home. “In the '50s and '60s in China, syphilis and other STDs were extremely uncommon. The number of new cases has just rapidly accelerated,” said Dr Joseph Tucker who is the lead author and an infectious disease specialist at the University of North Carolina at Chapel Hill. Although the cure, a shot of penicillin, is cheap, the symptoms of this disease are not easily experienced or noted by people, and if left untreated, it can be fatal.

Syphilis can also cause deafness, neurological problems or bone deformities in newborns. With no medical facilities to check the transmission of the virus from the mother to the child, in China, the number of infected babies is staggering. The World Health Organisation estimates 12 million people are infected with syphilis worldwide each year, affecting some 2 million pregnancies, with about one quarter of them resulting in miscarriages or stillbirths. “This damage is irreversible,” said Dr Connie Osborne, a senior HIV adviser at WHO in China. “Prevention of maternal syphilis combined with routine screening of pregnant women and early treatment of neonatal syphilis can prevent most, if not all, cases.”

Sexual urges are so strong that people can not resist them, as men have enough money to spend, go to prostitutes without thinking that they will bring home a disease, which affect their innocent spouses and unborn children. Instead of a treatment for syphilis, they urgently need to purify their mind and heart.

There are (in the Vedic Scriptures) many such prescribed methods of atonement, but here the Visnudutas say, “Although these prescribed methods of atonement are authorized and true, they cannot purify the heart.” ... A patient suffering from syphilis goes to the doctor, who gives him an injection and charges a high fee. Yes, he may be cured, but when he again engages in illicit sex, he once again contracts syphilis. So his heart was not purified of the desire for illicit sex. But if one takes to Krsna consciousness, he forgets illicit sex. That is the test of one's Krsna consciousness. A sincere devotee never commits sin, because his heart has become purified by chanting the Holy Name and engaging in devotional service.